The Challenges of Necessities: Power and Fuel: P Sri Ganesh

The Challenges of Necessities: Power and Fuel: P Sri Ganesh

P Sri Ganesh recollects his early experiences of growing up in Kolkata in late '50s. Having to study in the absence of electricity and without fuel for cooking, Sai Ganesh's perspective on the evolution of technology, as well as the capability to choose presents an interesting account of the transformation wrought by liberalisation in the most intimate and necessary spheres of living.

Starting point was in 1951. That’s the year I was born. There was an act that was created: Industries Development Regulation Act. “Why the industries need to be regulated?” was a big question. I got to know about it when I was doing my Chartered Accountancy and later (preparing for) Company Secretary and that is when I realised that this act is there. And it was really funny. It so happened that one of the persons in the committee, which was talking about the act we framed and all that. He wrote a dissenting note saying that no industry needs to be regulated. And he had advised Government of Singapore, the Government of Japan and the Government of Thailand. So the other three governments accepted what he said and you know where they are even today. And Indian Government did not accept his view point that the industries do not require regulations or restrictions. That is the thing which came as a more less a professional or what should i say on the legal point of it. But as a youngster, thing which happened was, I have seen my mother cook with firewood, charcoal and small pieces of wood which is tucked in and I had lived in the “best” parts of India which is UP, Bihar, Bengal. And I have seen the worst that is possible. And situation were such that the kind of firewood that is used and coal, all that, I had seen slowly change into, coming into oil industry and the change and the gas coming in. Then I had seen gas cylinders, then I saw piped gas. It is over the ages. Slowly people started changing their thinking and how it changed. Then came (change) in the way people were travelling. Commuting was only by cycle which changed into motorcycles and you had only Bajaj. Then going onto the commuting side you had only Indian Airlines and it was a nightmare to get from one point to the other on the flight. And railways  was again a complete mess. You were doing a service to the railways by travelling in them. Same was with the Indian Airlines. The best way it was remarked was as my father said, railways and Indian Airlines, “Oh they are only doing a job; they are not providing a service”. There was no incentive or no commitment to the organisation. So that is how it happened. And it continued. Nationalisation brought in a situation wherein people thought they were there for taking a salary and going home. No work was being done.  And I have lived in Calcutta, I have seen it. And the union, Communist union was so bad that Calcutta had no power. I had studied in “hurricane” light, candle light and you name the kind of lights that are available. You have seen some of the lights which the, so I would find out where the power is available, go from area to area with friend’s house, relative’s house, jump around, study. At night there was no power. It was completely terrible. The day I was transferred by the company to Bombay I said ‘Jai Maa Kaali’ and came out. 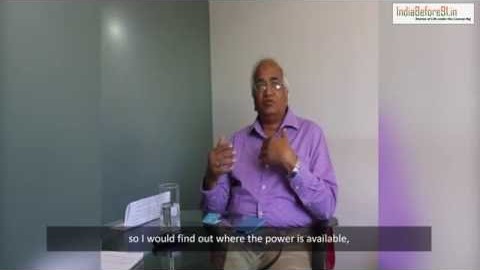