The Transformation in the Global Perception of India: Premila Nazareth

Premila Nazareth | Experiences Under the License Raj | India Before 1991

Premila Nazareth, Board of Trustees (Centre for Civil Society), narrates experiences of studying abroad and how according to her 1991 reforms have led to significant changes in India's standing among the developed countries.

Sharing her experience of travelling abroad, she says "One of my clearest memories in fact is of my grandmother, a very tiny, little old lady stitching rolled up dollars into the hem of her sari skirt so that we would have enough foreign exchange when we went overseas."

Watch this interesting video to know more about his experiences about how life was under License Raj.

The most striking change for me of all, the change that has come after 91- before 91 we were a country that was viewed really as a sort of poor and miserable country. Of course, politically we had a lot of standing in the non-aligned, the developing world took us very seriously, the developed world did not sadly. What happened now is just a complete transformation, this is really a post 91 phenomenon. Today we are regarded with tremendous respect. So I'll give you a little example from my own life- my father was a diplomat, so most of my childhood was spent overseas in foreign schools. I remember as a teenager being in London where my classmates were very cruel, this is now the late 70s and they would make fun of me and they would ask me, 'oh your family, your people, you all live in trees, don't you ? Just like monkeys. You all have a prime minister who drinks strange things in the morning', and they would giggle. And today the respect with which we are viewed globally and really this respect I must credit the Indian IT industry with, people like Shri Narayan Murthy, Shri Nandan Nilekani who have created for us this immense respect globally.

When I was young there was a very different environment in North-India and South-India. We did not have national television, the things that a child in Delhi did were very different from what a child in Bangalore did. We didn't have in that sense a true cultural integration nationally. Now post 91 and with the opening of say television to the private sector, with the opening of radio, with the opening of all sorts of other things which connect people to private sector participation and to global participation you see now the north-Indian child and the south-Indian child watching the same programs, eating similar foods, doing similar things in their spare time and more than that, you see the Indian child doing very similar things to the western.Another very vivid and striking change for me is when I was a child, firstly it was very expensive to fly from Delhi to Bangalore and back. Firstly, there was just very few planes available. Secondly, it was still a kind of luxury item, so only the very rich could afford it. And thirdly, if you actually manage to fly, because these were government controlled airlines, there was only Air India and there was only Indian Airlines. The government and the political class had mastery over that service. So for instance, you went for a flight which was to leave at 10 o'clock and sometimes the flight wouldn't leave till 1:00 because there was a minister travelling on it and the whole plane would be held up just for that minister to come on the plane. Today it's completely different, I remember some years ago I was going I think from Bangalore to Delhi on Jet or maybe it was to Bombay and there, a seat ahead of me I saw Shri  Chidambaram sitting just like anyone else, had come on time for the flight and sat completely anonymously like any other passenger doing his work.

So, one thing I do remember very clearly as a child was because we had capital control restrictions, it became very difficult to travel overseas. Either you just didn't have the money to buy a ticket to go overseas or if you did, you didn't have enough foreign exchange to use overseas. One of my clearest memories in fact is of my grandmother, a very tiny, little old lady stitching rolled up dollars into the hem of her sari skirt so that we would have enough foreign exchange when we went overseas. And because of having to do all this, there was always this fear that you are in violation of some law or the other or could be caught. So travelling abroad was never a joyful experience, it was always an experience wrapped in some kind of nervousness that you might get caught or you might run out of money overseas. For me this is really one of the biggest changes of post 91. 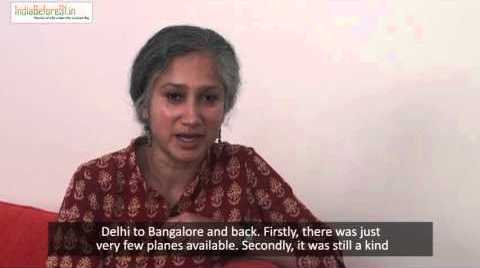