“Today orders are not questioned but certainly a junior expects a reasonable order, a reasoned order, a justifiable order.” Sandeep Bhalla, Retd. Brigadier, (Indian Army), is certain that the defence sector has seen a positive change over the years. He cites the example of easier communication and accommodation. He takes pride in the aware and confident army men that India has today.

I used to get four hundred and eighty rupees a month when I joined the army in 1971.

The inflation rates weren’t much, and things were cheaper we could maintain a... Let me also assure you with that type of money I could ensure a better standard of living and a better lifestyle than what it is probably today because things were also cheaper that time. But okay the amount was less but the price level was also reasonable at that time. I could afford a very good lifestyle. Yeah cultural change has been tremendous, I would say tremendous. It’s almost a turning it on the head, you know like. For example let me talk about starting from communication. For the army communication is of the utmost importance.  So it holds good for the army even today that communication is very important. For your own battle maneuvers and for communicating with the troops and the field in the battle, it’s very important. Earlier, when I joined the army if you had to talk 50 kms away, you had to book a call and then wait for a call which was barely audible. We had a magneto telephone in which you thad a handle which you had to crank to get the current passing through you know for the other person to get the signal. Today touch of a button anybody can talk to anybody across the length and breadth of the country or even abroad so the communication. Even for the soldiers who are on remote posts they are in touch with their families at home. Earlier we used to have accommodation which was only about 20% of the strength held with us so only 20% could get accommodation where they could keep their families. And they were rotated you know, after every 6 months the other lot were allowed to come so that everybody gets a chance to stay with their families. Today that has improved to almost 80% now. So things have changed. Then you have other changes like the people are more informed today. They are in touch with the national and international events and they are more confident, they understand what is going on around them. So earlier there used to be a senior and junior relationship where orders were obeyed implicitly and blindly. Today orders are not questioned but certainly a junior expects a reasonable order, a reasoned order, a justifiable order. Liberalisation in the country, is there for all to see. I mean you are taking it for granted. Today, you are taking it for granted. But if you were to go back before 1991, you know, it’s a 100% change. There were no housing, if somebody had a house he couldn’t give it on rent because the chap would not vacate it. You had no cars or consumer goods were not there. There used to be in the supermarket or any market a queue standing. People would blindly stand in the queue thinking that something will be available there. That was the state of things. And today, with open economy, with competition coming in, today it is a consumer market you know. Air travel which was reserved only for the gods is now commonplace, everybody is got a private transportation of some sort or the other okay. While earlier Indian companies were finding it difficult to compete with the foreign companies. Today, Indian companies have come up to the level that they are acquiring companies abroad.  I’m not talking about large business houses I’m talking about small companies in Kanpur and Agra. Small companies who are acquiring companies abroad. So that’s a change. I mean it’s something stupendous I would say. 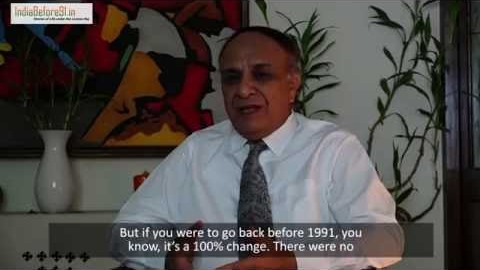 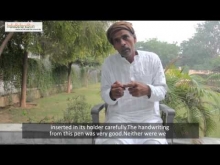