The Impact of Competition on Media: Gyanendra Bartaria

Gyanendra Bartaria | Experiences Under the License Raj | India Before 1991

Gyanendra Bartaria, a senior journalist, tells us about the impact of 1991 reforms on media and journalism. He says, "The media before 1991 was in itself a mission as well as a profession...But after 1991, we can see, as the markets developed gradually, media became a market commodity in itself, and all the ill effects of a market commodity started entering and became absorbed by the media."

Watch this interesting video to know more about how life was under License Raj. Transcript below:

Some of the problems people faced in their daily life were getting admission to schools or hospitals, or if they wanted to buy any particular thing they could not buy it from the open market even if they had money. An example of this is automobile sector. Television, for instance, though it had been introduced in the markets but was considered a luxury item. If any household in the colony got an antenna, then the whole colony used to turn up at his house to watch TV. Later on, along with demonstration effect and other changes, if any 1 household got an antenna, then all the houses in the colony got an antenna. This definitely promoted the communication and media sector, but government was the major player, there were very limited options. I remember there used to be a company named UPtron from Uttar Pradesh, and then there was ECI [Electronic Corporation of India] used to manufacture televisions. There used to be a private company from Punjab that manufactured televisions. However, there were a limited number of companies that manufactured television; many of those companies are nonexistent presently.

Earlier, journalism used to be a mission, then it became a profession and there is a feeling that it became a sensation now. But if we closely observe, then it is not even a sensation now, rather it has actually become a mere corollary of other professions or businesses. The media before 1991 was in itself a mission as well as a profession. Journalists didn't have to face many problems from the owners and the editors. But after 1991, we can see, as the markets developed gradually, media became a market commodity in itself, and all the ill effects of a market commodity started entering and became absorbed by the media. At present times, considering media in itself as a sustainable economic activity is very difficult. It needs financial support and financier from somewhere. These financers have their own rules and their set of do’s and don’ts. And the media houses are restricted to follow those rules, which is a very evident fact which cannot be ignored. This was not the kind of situation we faced before 1991. Of course most of the advertisements were by the government itself, and though there we no private television channels, but most of the newspapers used to sustain on their own and were free to print their views and thoughts openly. Now the circumstances have changed gradually, because newspaper and media have become a product in themselves and they have to exist in the market and be competitive in the market, so to be able to compete it has to be sensitive to the demands of the market and because their financer is also in the market, they have to be sensitive towards the demands and interests of the financer also. This is how media has changed. 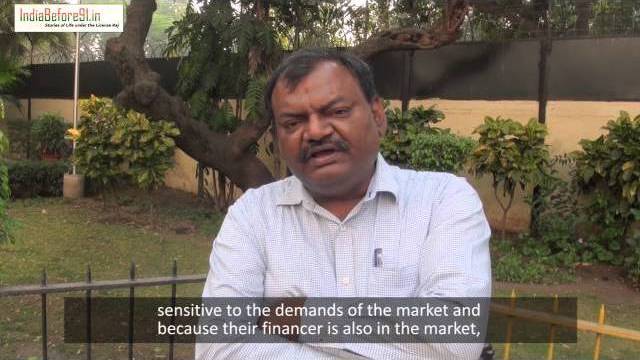