Defence Before ’91: The Absence of Autonomy: Sandeep Bhalla

Defence Before ’91: The Absence of Autonomy: Sandeep Bhalla

Sandeep Bhalla, Retd. Brigadier, (Indian Army), is very optimistic about the opening up of the defence sector which will make the country self-reliant. He explains the change in attitude and training of army personnel and how weapon technology has changed for better due to increased automation. After 1991, due to more private investment in the defence sector the country is no more dependent on foreign players who could “twist India’s arms” to gain advantage of India’s foreign policy or bilateral trade agreements.

The people were reluctant to come to the army. But today when a cadet comes into the army he is given a reasonable stipend for the duration when he is trained and that enables him to maintain a decent lifestyle. So that is one advantage. And then, you see today with nationalism growing, with the economy growing, in the youth of today there is a sense of national spirit and adventure. They wish to come and join the army and take up a honorable career which is not only in the national service but also gives you honor and respect of doing something which is above commercial interest of just making money. So that is attracting the youth today. And which is a very good sign that they are attracting the youth. It’s moreover a fact that you find every other day in the media that you find young officers who are leading from the front. India has got the largest volunteer force in the defence services. So today what happens is that most of the people who come in, they are not only computer literate and comfortable with them. They are also in touch with latest communication. Every one of them is in communication either on official net or by private telephone and mobiles. They are all in communication. So the training has changed drastically. Not only that there is a stress now on distance education. Earlier a person needs to go for various courses in his tenure, he would go for 9-10 courses to upgrade himself or keep himself abreast of new things. But today these courses’ duration has been reduced because a large portion of it is being conducted as distance education so that has reduced the training period as well it has improved the quality. So that is another change that has come. Before 1991, most of the weapon systems that we had were not so advanced as to use electronics in them. You understand as industrialization goes on, these new products are incorporated in all machinery, new machinery, new type of equipment is incorporated. Likewise for ammunition also, to make them more efficient, to make them cheaper and to make them better, they incorporate a lot of technology in that and embedded technology what do we call embedded technology of electronics is there in all weapons. Today, guns are there which aim automatically; we call it laying of a gun that is done automatically. Tanks fire while on the move, they lock onto a target while continuing to move they can fire on the target. So these are the things that are incorporated by technology being embedded in the system. And  since these are sophisticated you have to have manpower who are competent enough to man them. So that’s a very important point. Infact that has been the aim of the army. Before 1991 most of our weapon systems and equipment were being imported, very little was being manufactured at home here and since these weapon systems, the major ones, were being imported we were always at the mercy of the country who were exporting it to us. They could always twist our arm to gain an advantage elsewhere, either in foreign policy or in trade or bilateral relations wherever. So in a sense our national sovereignty was being compromised because we were depended on them for weapons. And after 1991 since we had little bit of more money to invest in the defence, technological advances took place in the industrial sector; it was possible to upgrade the technology of the weapons or to make better ones here in India.  And the Industrial Policy of 1956 has now been amended in which the defence sector is open to the private sector. Not only that on 1st January 2011, the government enunciated a National Defence Industrial Policy wherein any private sector company can manufacture defence equipment.  They’ve gone a step further as they have permitted Foreign Direct Investment in the defence sector and hopefully these will contribute to developing the defence industry in India so that we become self-reliant, we sale for exchange  and we are not dependent  on other countries for our national security. 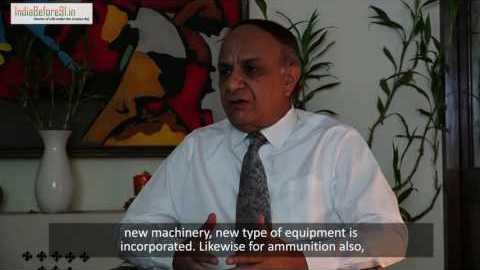