R V Kanoria is the Chairman and MD of Kanoria Chemicals, and Past President of FICCI. He has over three decades of experience in chemicals, textiles and jute industries, and hence speaks at length about environmental clearances and their licensing, then and now. He applauds P.V.Narasimha Rao for timely reforms and extends his praise further to Atal Bihari Vajpayee.

It’s a world of difference, I mean first of all we had to get a licence. Second, if we wanted to import technology we had to get a clearance from the Director General of Technical Development (DGTD) that this technology supplier and technology is approved at a particular price, at a particular royalty, at a particular whatever. After that we had to get approval from the Reserve Bank of India (RBI) to remit the foreign exchange and you had to get clearance from explosives or chemical (division), any of these processes remain. As I said the real change has been that you don’t require approvals for licensing and you don’t require approvals for technology import because the guidelines have been dealt. So I would like to see us move away from physical control to controls of self-regulation and what are laid out on the guidelines. I mean there’s a world of difference. Today if I want to set up a manufacturing plant which does not require an environmental clearance, I can do it by just registering as an entity without having to go through any control. I have to register for sale tax, I would have to register for excise. If I use a boiler, I would have to get clearance from the boiler inspector. If it’s a chemical industry I would have to get clearance from explosives (division) etc because of, there are normally more or less in every chemical industry, there’s some chemical which comes in which is either a fire hazard,or an explosive hazard or whatever. So some kind of clearance is required but most of these also, we can shift away from getting physical licenses. Suppose you get an environment clearance and then you violate the clearance. An absurd example is that we are taking permission. Suppose that you have to commit a murder, you take permission and they said okay you can, you cannot commit a murder, but then you go ahead and commit it. Then you are tried by law, right? But you don’t need a permission or a license to say that you are not going to commit a murder. Just like that, in an environment if they layout a guideline that your COD which is the Chemical Oxygen Demand, or the Biological Oxygen Demand; these are the parameters which determine environmental clearances. So this will not exceed 50 or it will not exceed 100, which means you will not pollute basically and that your emissions will not be beyond this, your discharge will not be beyond this etc. If you lay down those guidelines, and then you have a mechanism that you keep on random basis, you know, you keep checking and if somebody violates you prosecute. But by giving an environment clearance, you are actually taking away the owners from, say if I take an environment clearance and if I violate it, that is less of a problem than getting the clearance itself. So I think we need to move away from this mindset that by granting a license or by granting a clearance or by granting the permission you are really doing nothing. When in 1991 India’s foreign exchange reserves had fallen to zero. And India actually had to ship it’s physical gold to the Bank of England and my view is that the liberalisation and reform was pre-empted not by choice but by compulsion and became choice only later on. As to who was the architect of the reform? I would say Narasimha Rao was the architect of reform. Manmohan Singh was picked up from, and heads off to the RBI governor earlier. But in 1991, he was in the University Grants Commission and he was picked out from University Grants Commission as Finance Minister of India. A bureaucrat with no political experience. Now in my opinion, the lack of political experience was actually a boon because it allowed Manmohan Singh to take independent decisions without caring about how his political career would be affected as a result of those decisions. So, Narasimha Rao was one of the brightest minds. I mean, I as a very young man, I have had the occasion of several delegations of FICCI with Narasimha Rao, to Paris and I have seen him operate. He was a man of very few words. He was known as a pouter, that whenever there was a dilemma he would just pout and nobody would know what is going on in his mind. But he had the ability to speak, read and write nine languages. And I think he was really, he picked the right team to change the country and to bring about that reform process. The second person I think who carried this through was Atal Bihari Vajpayee. I mean, he put on ground many of these things which the country required. I mean, the biggest contribution was towards infrastructure particularly the physical infrastructure and road building and so on. 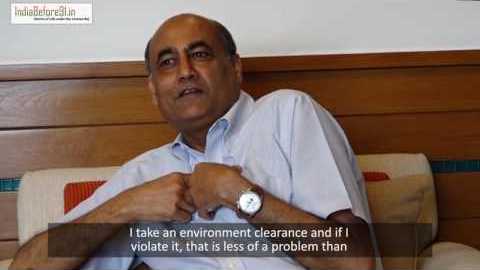