Ram Rahman, eminent photographer and curator, dwells into the photography market and explains in depth the sea change that the market has seen in terms of availability of equipment, jobs, exhibitions and more. He tells his story on how he was able to learn this art through limited means and resources. He shares his experience of the smuggling in of camera lenses due to astronomical import duties.

Photographically, in those days, because of the restrictions of the economy, you couldn’t buy cameras, film was very restricted. So, you know, press people had cameras, because newspapers were allowed to import cameras, but if you were an individual, it was very difficult to access cameras, because sales of imported, I mean, cameras were all made abroad, either, in Germany or in Japan, or in the US, or England. And, after the early 1960s, most of that import stopped. So, it was really in a sense an elite, I mean, you had to come from a socially and economically fairly well-off background, to even get a relative to sneak in a camera through customs, because the duties were so high. So that was a huge restriction, I mean, you know, it limited the field, it limited the practitioners enormously. Also, processing films, access to film was very difficult, especially if you wanted to use colour film, kodachrome, colour processing hardly happened in India, it was very, very limited. So after the liberalization, there was a sea change. And it happened within a few years. The difference that happened, we didn’t have access to books, say photography books, easily. I mean, there were, even in libraries, you didn’t have access to really a history of photography. Few books that friends had, we would share amongst each other, so it wasn’t just the lack of access to equipment or to lenses, which mattered, but it was also a kind of disconnect from the larger world of photography outside, and that is of course something  that I got exposed to enormously in the US. But coming back, you know my interest in doing exhibitions, on Sunil Janah from the 1940s, or Madan  Mahatta from the 50s and 60s, was because of that, because I realized we didn’t have our own histories, and this work was not out in the public, not seen by the younger generation of photographers, actually even, an older generation of photographers, because we didn’t have a lot of exhibitions. You know, these had limited circulation. Especially, specialized areas of photography. So that was something I was very aware of and I, of course, having had a foot in the US, was very privileged. I, because of my architecture connection, professionally, my earning as a photographer became architectural photography, and I specialized in that, and I had to get specialized equipment for that. I had to get a view camera, special lenses, packs; all of which was smuggled in, because I couldn’t, no one could afford to pay those huge duties at that time. Job opportunities have opened up quite a bit, you know there are photographers now, who can earn doing fashion photography, people are spending for weddings much more, they hire photographers for wedding now. They did at that time (too), but it has become much more the done thing now, so even if you have somebody who is relatively poor, they will hire a photographer to shoot their wedding in a basti in Delhi etc. So,  industrial photography has expanded a lot. At that time, you know, like Madan etc., they were just a handful of photographers, now, of course, many, many more. But if you are talking about institutionally, in terms of art support, that also changed. See, the other thing with photography is that we didn’t have a lot of exhibitions. Very, very few in the ‘50s, or in the 1960s because it was something very expensive to do. So unless you had funding to do big prints, to do framing, you know, these things people forget, that we didn’t even have proper framing in those early years. I remember, when I did my first show in Delhi in 1986, I had to have the frames built by hand. You see, the few photographers who did books, in the pre-liberalization days like Raghubir Singh, or Raghu Rai etc., they were really expensive books, which most of us could not buy. You know the middle class couldn’t really afford those books, they were really aimed at the tourist market. And therefore, it also, the nature of the books, was oriented towards that, so they had a slightly Orientalist feel  of looking at the exotic India, the sadhus India, the village India etc. in those days. That, of course, has completely changed. So even the aesthetic, or how people now look at India, as practitioners has also changed, because the field has opened up, because there is now an economic base that allows that to happen. 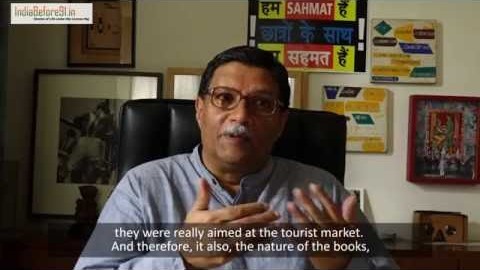