When Pens were a Luxury: Atar Singh, Farmer

Atar Singh, Farmer | Experiences Under the License Raj | India before 1991

In this video, Atar Singh, a farmer from Jona Pur village shares his childhood experiences related to school and lack of sugar and sweets in their village. He narrates, "Though we loved sweets and chapatis made out of wheat flour, they were not available in our area." Watch this interesting video to know more about his experiences about how life was under License Raj.

My elderly as well as my parents valued education and wanted me to study. They put great emphasis on education, and my father was even more concerned about the same .If there was any event in the school, even if it was far away, my father used to attend such events related to schools and education, my father supported my education. I have studied till class 8th.

For writing, we used to have a dawat (ink bottle), which we could either get from the baniya’s shop or make it on our own. Along with that, there used to be a small packet of permanent black ink of 5 Paise whose mixture was made (in the ink bottle). Sarkhanda (a plant), which we picked from the forest, was used to make pens. The teacher used to make these pens; he would keep a knife with himself for this purpose. We used to use this pen. We were not allowed to write with anything else; for many years we used that pen. We even did our homework with it. Then I got a certificate after 5th class and got admitted to a school in Ayanagar for my 6th class. Over there, we used something called ‘gekinib’ which, after writing, had to be closed such that it doesn't break, it had to be inserted in its holder carefully. The handwriting from this pen was very good. Neither were we allowed to write from any other pen nor did we have many options. These ball pens etc. which are used now, we hadn’t even seen them, nor could we buy them because we hadn’t even seen the markets.

We had to buy books from our own at that time, we did not get any books from the school, and there was no government support. Even water availability was quite low, a man used to pull out water from the well and fill the water tank. There were no taps either.

The shopkeepers used to live in Mehrauli, my father used to visit them quite often, and because I accompanied my father, the shopkeepers came to know me too. We used to buy things from them with the agreement of selling them the crops once harvested; this purchase was in the form of a debt. When we used to take our grains to them, they used to pay us very less. Their scales also were not fair. Example, if a delivery that we weighed at home was 70Kg, the same weighed around 60Kg on their scale. And they used to do the accounts in some other language, which we used to call Farsi or ‘Baniya ki Likhai’, which no one could understand. This led to the debt being continued for long, whoever started taking debt entered into this vicious cycle of debt and deceit.

When we were small, we used to like sweets, but sweets were not available in our area. There were no shops, from where we could we buy it, also we did not have the money to buy it.

Though we loved sweets and chapatis made out of wheat flour, they were not available in our area. Jowar, Bajra, Sarso, Chana, jau were more common. We didn’t grow wheat because there was not enough water for its irrigation. There were no irrigation facilities, everything depended on God. If the monsoon season was good, the crop used to be very healthy and abundant. There was no wheat. Sweets were only given either when we had guests over or on Amavasya (new moon). Jaggery or sugar used to be put in ‘ Kheer’. Ghee was also available. But these were not very easily available. 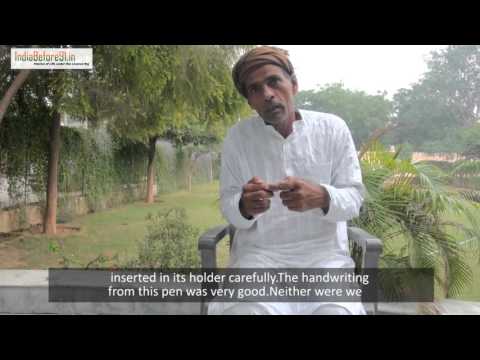