Rajesh Chakrabarti, Executive Vice-President, Research and Policy, Wadhwani Foundation, emphasises the importance of branding for Indian companies in order to compete with multinationals in the post-liberalisation period. He talks about the different approaches adopted by two of the biggest industries in India, namely, Tata and Reliance, in the face of foreign competition post the ‘91  reforms.

I mean in 1991 if you were looking for a, say a bottle of cold drink, your choices would be Campa-Cola, Thumbs-up and all Indian brands, Parle was the big player. Today the competition is completely between Pepsi and Thumbs-up. You want to pick up a washing powder today, the competition is largely between Unilever and Procter and Gamble. And this stretches everywhere. You want to go to a pharmaceutical product, big brands. So clearly, you can visibly see Indian industry losing ground to global brands. Right. Look in 1991, where did we go and have our pizza and ice cream? Nirula’s. Nirula’s in CP was the big thing at that time for young people. Right. Today, people go to McDonald’s. I mean it’s still run by Indians of course but the brand is global. So Indian branding power has completely lost in face of MNC competition. Is that a good thing or is that a bad thing, that is a big debate. I’m not necessarily saying that Indian brands should survive if foreign brands are getting very superior products or at least the impression of superior products which is what branding is all about. But an interesting and a telling narrative is how two major business groups in the country handled this onslaught of foreign brands or foreign competition. So in 1997, Ratan Tata made a huge comment somewhere saying that the Tata group is going to exit the sectors where it is not one of the top 3 brands in the world.

Within months, you started saying, Tata’s put a lot of this thing on the independence of their industry, but you just need to see how quickly the message got around. So Tata Tea went and acquired Tetley. Right. Tata Motors went and acquired Daewoo in Korea and a bunch of other players and then of course later on Land Rover which came in. Tata steel went out and acquired Corus. And so on and so forth. So the Tatas took to the changed environment. Because now protection was gone. Indian market was open. So the Tatas said well you know what, we are now a part of a globalised market place, we cannot play the India game before. We’re not functioning in a protected environment anymore. So what we are going to do is we are going to define ourselves as a global player and we will stop looking at ourselves as an Indian player and we are going to function completely as a multinational corporation, an Indian origin multinational corporation and we are going to take the foreign competition head on. The battle will not be only in India but around the world. And the places where we cannot beat that battle, where cannot be among the top 5 producers globally we are just going to get out of it. This applies to Indian hotels, Taj hotels went and acquired major foreign properties, foreign keys.

Contrast that to the approach taken by Reliance, which is a major player. Reliance said to heck with India, I mean, to heck with go out of India, we will be, we are the number one player in India in our sectors, we will continue, we will protect our turf. We are just better off than any multinational competition that is going to come here. We are not even going to try to become a global player. India is where the growth is. What are we going to get out of going to an OECD country? The growth in an OECD country, I mean, at the best of the times is 2.5 %. India grows between 7-8 % depending on where you are. So this is where my business is and I’m going to be the entrenched and the number one India player and I’m going to protect my turf in India where the action is from foreign players. And both Tata and Reliance have succeeded in their own ways very well. Following two completely contrasting approaches to the forces of globalisation that have been unleashed by liberalisation. But by and large Indian brands, I think, particularly consumer brands, have not been able to hold their ground against the foreign onslaught. 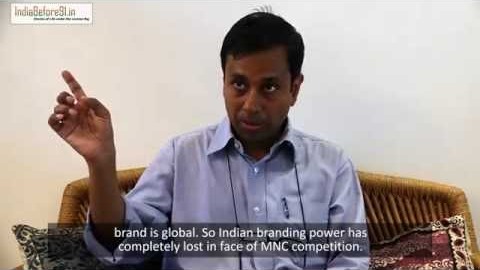