Sidharth Birla, Chairman of Xpro India Limited and DigJam Limited, and Past President of FICCI, discusses the difficult procedures under Monopoly and Restrictive Trade Practices Act. He discussed how apart from advertising in trade journals and newspapers, a company also had to undergo a public hearing before being granted the licence to operate.

People today actually don’t have an idea of what business life was like say 30 years ago, or 20 years ago. So you know, and it sort of continued till 1991. So, I think 1991 was a good break point. Right from our school days, I think, even when we were young we used to sort of sit in the family and listen to all the conversation that used to happen and see all the family grown-ups who used to talk and there were certain things which actually stuck with me even if I didn’t understand them. You know one of them was the monopoly raj, the monopolies Act, the MRTP Act and for some reason, you know I mean politically, a lot of large businesses and business houses were clubbed under MRTP and probably that used to take the biggest share of mind of the elders as I was growing up. And MRTP by the way,was defined as a group, a combined group with the total assets of more than 20 crores. Now, 20 crores today is actually,  probably a small building in the middle of Delhi. But what that did and that is the problem that used to agitate all the time is that if you wanted to work, you actually couldn’t expand and therefore the Monopolies Act, instead of actually helping the market by curbing monopolies, actually destroyed the market by creating some optimal capacities and everything got diffused and diffracted to such an extent that even if people wanted to produce and expand they couldn’t do so. So really speaking the person who was hurt was the ultimate Indian consumer. So this was the great dichotomy. Actually one of the big points of 1991, was that MRTP got repealed, okay? So, I mean, this is what I used to hear. Mr.G.D.Birla, he used to run grassing.And grassing, he was a manufacturer of fibre of not synthetic fibre but it was made from bamboo pulp. So viscous fibre. Now viscous fibre was widely imported into the country because of cotton shortage in the country. So viscous fibre was used as a substitute for cotton. So we would import tons of it and from everywhere in the world including UK, America, here or there and etc. So grassing was used to make viscous fibre. They were given a licence that please manufacture say 25 thousand tonnes in a year. But they could have easily manufactured say two hundred thousand tonnes at that time. So Mr. G.D. Birla took a decision that I am going to expand. When he expanded he actually got a show cause prosecution notice from the government saying that why you shouldn’t be prosecuted for actually producing more than what we have allowed you to. So you know, this was the big sort of, it used to capture a lot of family time and this is the kind of circumstances that we grew up in. So we had to be actually, being part of a monopoly house, you actually had to go two layers of licencing problems. One was that actually get the licence itself. But for a monopoly house before you got a licence, you had to go through an additional procedure which was to get a monopoly clearance or a clearance under MRTP and technically you had to advertise in the paper that I want to make this and then there would be a public hearing and then there would be a government hearing and then somebody would apply his mind whether you should be allowed to make it or not make it. So it was very different from the CCI of today. The CCI’s ultimately market dominance or rather how to prevent abuse of market dominance. That MRTP Act would sort of try to control the baby before it was born and therefore shape the baby before it was born. So this whole thing, if you had an idea today, if you have the market opportunity today, by the time you could actually act on it, would be a period of three to five years. So you know, that was the kind of time scale, today if you have an idea today, you could be in the market by next year including in production or service or whatever you are doing. Subsequently I think in the ’71 coal was nationalised. Now the great difference I remember throughout growing through my childhood, it used to be like moving the heavens to get a 50 paisa or a 30 paisa increase of coal in terms of price. Because the government would control the price and the government would say “No, by this the poor would be at a loss”. But the point is say in ’71 and I think if you look at the coal pricing from ’71, 30 paisa wasn’t talked about. It used to be in tens of rupees of rupees and the price started going up of coal. So definitely coal was a very attractive industry, but it was a very difficult industry. And it was basically the Bihar and Bengal region. So the nationalisation according to me did a disservice to the country. 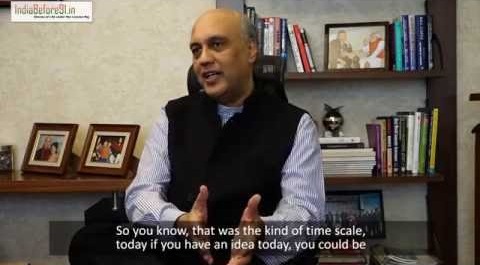