Mohit Satyanand, Co-founder of Teamworks Films,  reveals how he managed his foreign trip expenses when the RBI allowed only a distinct amount of foreign allowance. Relive the experience of a journey abroad during those years through his words.

I went in 1977 to Asia and Europe for an overland trip, trekking, bus etc-etc. The Reserve Bank of India effectively decided how much you could spend on a hotel, how much you could spend on the meals. It was broken up in that manner and the amount that you got depended on your designation in the company. There was a full table which said that if you are the Managing Director (MD) of a company with a size larger than so and so then you got a hundred and fifty Dollars if you went to Europe or America; and a hundred and thirty Dollars if you went to the Middle East; and a hundred and ten Dollars if you went to East Asia; and so much if you went to Russia; and so much for entertainment and so much for transport. Even to get this you had to apply for what was called a 'P form'. If I travelled abroad with a camera, even a beat up, old second-hand camera I had to get the customs authorities to enter the fact that I was carrying a camera overseas because otherwise when I came back the presumption would be that I was smuggling a camera back in. So I'll show you this passport from the 70s. What the regulations meant in terms of foreign travel? That you where allowed one hundred dollars for private trip and even that 100 dollars was entered in your passport. Even so you couldn't do it in a 100 dollars. That meant that 90% of people who were travelling overseas from India were breaking the law the moment they decided to go because they had to find some way of arranging those funds overseas. Whetherthrough the Hawala’ route or through some relative or whatever, some arrangement to pay people back for the money that they were spending overseas. You could travel on business and you got a business allowance. So when I travelled to, Paris and then back. And my ambition was to travel on 10 Dollars a day and I actually managed on less than 10 Dollars a day. Nevertheless, if you're talking about, it was something in the region of 8 weeks. So even so you're talking about 50 plus days and even at 10 Dollars a day you're talking about 500 Dollars. But I was allowed a hundred Dollars as foreign exchange allowance for a personal trip and you got 8 Dollars which was supposed to cover cost of coffee and a telephone call and a bus journey into town when you reached the other end. I mean this is the kind of stuff Babu’s spent their tax paid hours of work thinking about. 8 Dollars, somebody came up with this magnanimous number for this allowance. So clearly this was not enough. So what did I do? I bought a hundred Dollars in the black market from some tourist in Janpath and I went to Mohan Singh Place which is where all these kind of trades used to take place, you could buy old jeans, even old jeans had a premium because there were no jeans in India and I bought a sleeping bag which was an unknown commodity over here. So I bought a sleeping bag for a couple of hundred rupees which was torn and battered but I needed a sleeping bag and I bought a hundred Dollars at a premium of, premium which used to run like 30-40 percent. So from my pocket money I bought a hundred Dollars in the black market. How to take it out? So I took a hundred Dollar bill and I folded it into four bits. So it became a narrow strip. I opened up my film reel which I was carrying aboard and cut it in half. And I re-threaded it back on to the cassette and at the back end I put this hundred Dollar bill. It's the kind of ingenuity that I had to come up with okay? I still had only 210$ and my budget was like I said 450$. My father had business friends in Paris. He used to travel on international business in those days. So my father said, you know, I will try and save some money. But he actually left 200$ for me with a business contact in Paris. The moment I arrived in Paris, I rung up this gentleman and he said- 'ah, I was waiting for your call. I have a gift for you from your father'. So I went- ‘oh, for 200$'. He had to travel some high level contact to get me 200$. That's how I managed. And on my way back I ran out of money in Tehran. And again the same thing, those were the days of the oil boom. We had lots of Indians working in Iran, building storage tanks, some working in refineries. A classmate of mine from Delhi School of Economics (DSE), her father was part of that oil boom. I rung them up at 7:00 am in the morning and said I am completely broke. I landed up at their doorstep and they gave me enough money for the rest of my journey back from Tehran. That’s how we managed. 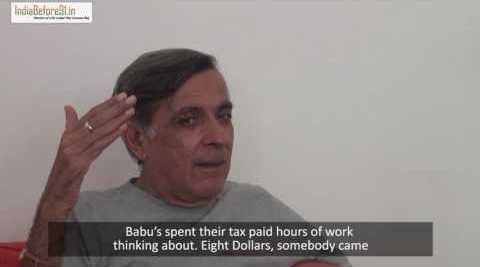