Prof Jayati Ghosh explains the importance of the communication and technological revolution, and how the advent of mobile phone technology has altered our world completely. She also discusses how factors influencing mobility have changed due to this, and the rise in aspirations of people belonging to all economic classes.

You know, I think, one thing that has happened, and well, several things have happened today. The communication revolution. It was going to happen anyway. But it’s an extraordinary thing, the fact that everybody has got a mobile phone. It actually changes people in ways that we don’t even begin to imagine. But it’s a terrific thing. The growth of an aspirational group among, I would say all classes, you know, people call it a middle class, I don’t think it’s just the middle class. I have seen, you know, young villagers in Andhra Pradesh, in Bengal, you know, who have different aspirations, who have a thirst for bettering their condition, and not just their own condition. And I think that’s wonderful. Now whether it would have not happened otherwise. These are counterfactuals that I can’t answer but yes that’s definitely another very important, positive change that I see and with that the sense of mobility.

Earlier, mobility was also associated often with distress. And that still is a lot of distress migration and so on. But the notion of mobility as a source of opportunity, I think is a very important thing. Having said that, I think the lack of change or in a sense, the cementing of some very adverse kinds of social relations is to me, both a source of distress and a source of huge surprise.

I would say once again that communication, that telephone. You know, It was such a prized item. You had to be in a very very long queue and often it would be, you may have been the lucky ones in your neighbourhood who got the telephone and then everybody else would come to make this call and of course it was a very scratchy line. A trunk call was this enormous thing. A trunk call is something which you did to another city. The city could be Jaipur, could even be Faridabad, but it was a trunk call. You had to book it in advance, you would wait for the time. You’d be sitting there. You’d get exactly three minutes and you’d be rushing to just sort of say anything you could in those three minutes. Sometimes it would get cancelled. So you’d have come, gathered all your family for the wonderful trunk call and it wouldn’t happen. So it’s impossible to imagine it today right? I think none of you can even imagine, for example, that you’d gone to fetch somebody from the railway station and the train is four hours late, which was very typical in those days. But there is no way you can let the family back home know that the train is four hours late because there would be one phone booth in the entire railway station maybe and mostly it was out of order or there was a very long queue or it was impossible to get through or whatever. So you would basically keep waiting and maybe the four hours become five, six, seven and you don’t know and the information doesn’t get to you either. I think that is something none of you can imagine because you’d all be sending your SMS’s and it just would not occur to you that there is such a lack of the sort of basic communication. So that is a massive massive change.

There was one, I was trying to think, when you said what it was like, life in those days. You know I don’t want to sound like one of those old people who seem to think that the things were very good in the past. They were not. And they were all just as unequal and horrible. Okay. They were less brash but they were also unequal, in a more feudal or subdued way.

But there was one thing I remember from my childhood which I often wished we would bring back and that was something called the ‘guest control order’. Now this was basically when you had more than a 100 people, you had to have to sign on something called a guest control where you were not allowed to serve more than I think four items and so on and so forth. And often, the worst thing you could say about somebody was, “Oh! Do you know his son’s wedding really flouted the guest control order and nothing was done.” Again, can you even imagine that today with the kind of lavishness we see for, you know, children’s birthday parties, forget weddings. We’re not even going into the five-day weddings thing. I must say I wish for a little bit of that if only because it just was a reminder to us, among the privileged, among the elites, that there should be some limits on your ability to just splash out on yourselves. 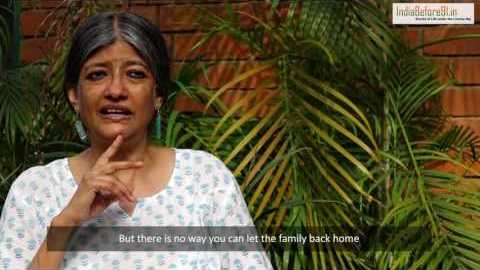