Geeta Gouri, Eminent Advisor at Competition Advisory Services, discusses how unbundling in the electricity sector never quite happened, and how the control of this crucial resource stunted the growth of industry in India.

My father was in a private sector power company and over the period we saw the nationalisation till I became involved in the Electricity Regulatory Commission which meant unbundling. Okay. Now in the power sector, what was the problem with the power sector there were tremendous shortages. I don’t know if you knew about it but we’d have eight hours power cuts, there would be a lot of volatility and although there would be some amount of investments that are taking in generation even if generation took place there would be transmission problems and everything was based either on coal, which again was given only by a public sector company, The Coal India, or on dams, which is your hydropower, and dams if there is a bad season, there would be tremendous shortage. And this affected a lot of companies. You know the sick industry issue started coming up by then because lack of power meant that cement was affected, aluminium was affected, paper was affected and it was not only a shortage of power, but it was also a question of the volatility. There would be spikes or there would be very low voltage. And except people were thinking, what was this public sector reform. The lines kept getting extended but not the quality of power and the amount that was being generated was not sufficient at all. And that’s when the process started of looking at it in a different concepts altogether.

So power is a very critical infrastructure. It really is necessary for any kind of industrial growth.

The state must withdraw from being an economic agent and let it only regulate as a, as a, distancing and allowing only, coming and only when there are market failures. So there is a question of the state withdrawal and distancing from the day to day functioning. But where the public sector units were concerned, the state never withdrew. There is nothing like allowing freedom for the manager. There was nothing like just letting them compete. And whenever they competed, all the benefits that they were getting earlier had to be removed, that is, price preference, listing preference, all that had to slowly go. And now it becomes a question of is it necessary for the government to be really where it is?

Having withdrawn the process of regulatory framework that started coming up, it is interesting that the initial sectoral regulators come up only in power sector and telecom sector. And when you look at it, the first Electricity Act, that looked at Orissa and then came in to Andhra which is around 1995 till the Electricity Act for the whole country came up in 2003 was for bringing about the unbundling. But the unbundling only meant that we would have more public sector units in a state. It’s not that you were going to have private participants taking place. And we never allowed and even now we have not allowed creation of electricity markets for several reasons. One of them, the most important thing being, the fact that the retail side has distribution and retail supply license, while there has been a considerable improvement in generation and a lot of private sector people went into generation, and I think the Andhra entrepreneurs have been the most dynamic in getting as many licenses as possible for generation. They all wanted to sell it to retail supply, they were not creating a market and open access never did take place. TSo, the electricity markets and the myths of the electricity markets still continues to persists. And unless we’re able to handle the power situation, I think this really pinches us, even now. For competition, you need good power, you need, you need valuable power, you need good quality power, anything other sort of reforms don‘t come in and for it you need to have competitive markets functioning. But the sectoral regulators, whether it’s telecom or power, always operate through the tariff route. And they really are not the people who’re good in understanding how markets function because that becomes the domain of the Competition Commission. But when does the Competition Commission come up? The Act was passed in 2002 but it was only in 2009 it starts functioning and then it get repealed in 2009. But if we have gone through these shortages, and this frustration in the public sector, what always amazes me is wherever possible the government always tries to intervene. You know agriculture is one place where we should just left it to the innovativeness of the farmer and only given support systems. I think this present budget is trying to look at it in terms of that sort of support system. But you can’t go around the way the Russians did who decided where you would put the seed, when you would plough, when you will do it, because each area has differences and it is a very charitable attitude. Similarly, with industry, it suits people if the government is going to take on the cost of everything. But who suffers in the process, suffering is the common man. The costs are very high, efficiency and productivity doesn’t increase and employment doesn’t get generated. 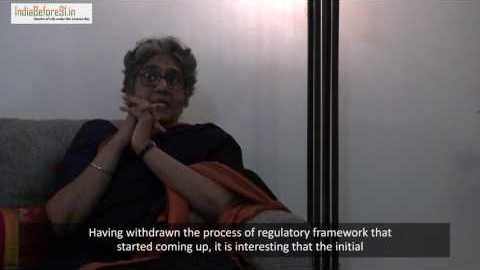