K G Suresh, Director General of Indian Institute of Mass Communication (IIM-C), among other things talks about change in perception towards corruption in our society, and how corruption was stigmatized in our lives.Illustrating this he says "...corruption has permeated the society and the sadder part is not about the increase in corruption but the acceptability of the corruption."

He further narrates that markets have evolved from a producer market to a buyers market due to an increase in consumerism.

Watch this interesting video to know how was life under the License Raj. Below is complete transcription of the video:

The most important change if I see is that from a producer's market, we have become a buyer’s market. Earlier I remember we never had choices. I still remember those days when we would go and there was this DCM showroom or a DC Tooth Store as they would call it. We would buy these clothes first, get them stitched and we had limited option. And so much of options are there today compared to that earlier period. Facilities were certainly much less You know about the gas supply, 'oh the cylinder is over, I have to call up, I have to somehow get it'and sometimes I used to buy from market even when the LPG came into the market. Of course before that we were using kerosene and all that. So we really had to struggle. There was no double cylinder in that time. So life has become much more smoother, absolutely no doubt about it.

It's become a consumer market no doubt but consumerism has also grown so much that one- everything has become very very costly, second- we have become I would say a society which is in a perennial debt trap. My parents were far-far happier and satisfied than today's younger generation who are more worried about paying their EMIs. I remember one of my colleagues, used to get a very good pay package. But one month, he just lost his job for a month and he was from the verge of a break-down. I said, 'Come on, you've been getting paid a very good salary. People are in this country who earn about Rs. 20 a day. You're not happy there are such people also and they count in minutes and you just lost your job for one month and you're cribbing?'. He said that 'brother, I have to pay my EMI. It's not about the job; it's about the money I have to pay. My car is on loan, my house is on loan, my electronic gadgets at home, and everything is on loan.’ So everybody seems to be under debt. They do talk about farmer's debt, farmer's loan and all that. The kind of stress that younger generation today has to keep up with the Johnson's in the neighborhood, who gets the bigger car. So that level of satisfaction, I am not saying that we should not grow, evolve as a society but somewhere it has led to greed.

Earlier, a couple of lacks or even a couple of thousands if we come to know, the society would come to know that somebody has taken a bribe, it used to be a big issue. We used to call it a racket or a scam. Today scams are no less than thousands of crores. The way corruption has permeated the society and the sadder part is not about the increase in corruption but the acceptability of the corruption. I still remember I used to stay in this lower middle class locality called Nauroji Nagar- government accommodations. They were all government servants and there was an income tax raid at his place. Believe me, we were, the entire neighborhood started boycotting their family. Virtually they had to move out of that locality after that income tax raid. Today I think it has become a prestige issue. 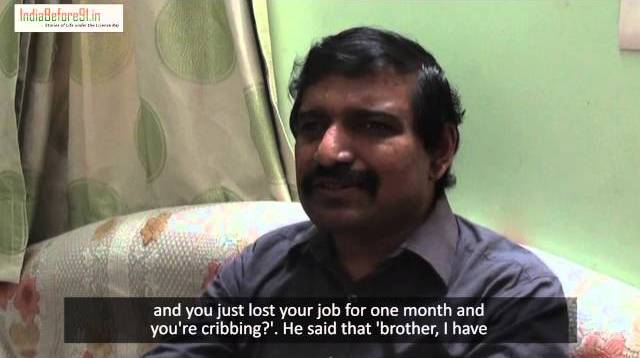