Rajesh Chakrabarti, Executive Vice-President, Research and Policy, Wadhwani Foundation, talks about the factors that led to the stark contrast we witness in India before and after the Economic Reforms of ‘91. He discusses watching the budget speech given by Dr Manmohan Singh in ‘91 live as a student.

I think we have to understand that liberalisation was not a one blow activity and the changes, India today, as we see India today is a completely different country and reality from what existed before 1991. Now, what’s important to realise is that a lot of it but not all of it has been a result of liberalising policies. At least two forces have lead to this difference, the stark difference between India of the 70s & 80s, let’s say, and the India of 90s-2000s-2010s. And those two forces in my mind are liberalising policies, the change in the political structure of the country, including the sociological changes in the political hierarchies and the strengthening of certain previously neglected parts of the population. And probably to an even greater extent than both of this, by evolving technology. So All these three factors have contributed to this before and after situation that we see.

So in order to get the setting for the lived experience, I must tell you that in 1991, I had just finished my undergraduate degree in economics from one of the more, quote unquote, “left-leaning” institutions in the country, Presidency College, Calcutta and I had moved to, probably what would be the, what would be one of the high temples of capitalism at that point if such a thing exists, would be IIM Ahmedabad as a student, from the left to the, to whatever qualified as right, in those days. And we saw, I still remember, we saw the Manmohan Singh’s budget presentation on TV while I was at IIM-A and  it seemed like he was demolishing all those things that we were taught to respect and hold as ground truths for economic policy-making and it came as a, came as quite a bit of a shock. And personally I did not agree with much of the left-wing gibberish that used to, used to go along the conversation particularly in a place like Calcutta and very left-leaning talk which didn’t seem right even in that milieu and at that age. But Manmohan Singh’s budget clearly seemed something that was, what’s the right word, it was like quite like going against whatever we had learned as being the right thing to do.

So what is interesting is how the, how the, received wisdom in economics has shifted. So going into 1991, we, as young students of economics, that we were already parroting the virtues of MRTP, the virtues of control, because that’s all that we had been taught in academia in our subjects was that how the mixed economy & whatever that mix was, was the best thing to do and how we needed to do to keep the greedy capitalists at bay through proper regulation and how the poor could be taken care of only by restricting the rich from going too far. And today we talk about a completely different reality, we talk, we teach, what we teach in classrooms are extremely different. So it’s quite fascinating to see how the narrative as it is taught to the students of economics has changed over the years. And I can assure you that the first 5-6 years, there was quite a bit of doubt, it was not very clear at all. Like right now that doubt has almost, receded completely. People know that liberalisation was a good thing, it was a positive thing, and it has brought about huge changes, and that there is no going back on liberalisation.

But if you look at the political declarations of the Narasimha Rao government, during that first critical phase of liberalisation, what is fascinating, if I remember, if my memory serves me right, then almost every 3 months, you would hear a declaration from Manmohan Singh, saying the reforms, the liberalisation has moved the point of no return, has over taken the point of no return, which of course he had to keep on telling people because nobody was sure how soon the reforms would be reversed and how quickly we would go back to the, to the old regime. 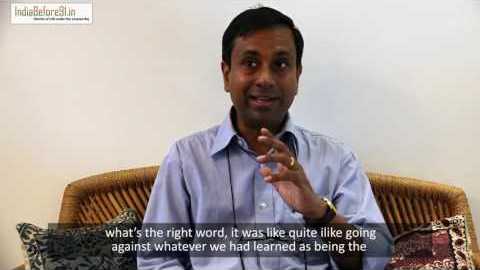