Prof Shreekanth Gupta discusses the comical state of dead telephones across the country, with poor state services in the telecom industry. He also mentions the OYT, or Own Your Telephone scheme, under MTNL and the difficulty of having to grapple with poor services.

There used to be a Communication’s Minister in Mrs Indira Gandhi’s Cabinet, called C.M. Stephen, can check him on Wikipedia or whatever. And the quality of the telephone services were very poor, the state was the only provider of telephone services, it was a monopoly, service standards were abysmal, getting a telephone was very difficult. Even if you got a telephone, it would be dead most of the time. And people would be unhappy. So he made a rather infamous statement, which is a fact and I’m sure you can research this. He said in parliament I believe that if customers are not happy with the telephones, they can return them, which is a very unconscionable thing to say here is the State which is providing this service, which is very essential, it’s a monopoly, there is no private sector dur tak (till far away) and is doing a terrible job of providing this service. It was corrupt, it was inefficient, it is not very great now but you can bypass it and you can have so many other options. And the Minister is, rather than taking responsibility and telling customers that look we should do a better job, is actually standing in parliament and saying that if people don’t like it they should return it. But that, those were the days one lived, and having a telephone you almost felt it was a big privilege. Or let me put it differently. If you, If the state gave you something, it was almost like they were doing us a favour. Getting a telephone was not that easy. You had to book it, and they had something called an OYT, I don’t know if you’ve been told about it, that was called an ‘own your telephone’. So you had 2 ways you could actually acquire a telephone line or telephone. One was normal connection, I think it was called General Category. You had to pay a thousand rupees (Rs 1,000) and wait. Or you had something like a ‘Tatkal’ thing where you paid, I think, eight thousand rupees (Rs 8,000) if I remember, and you could get the telephone right away or on a much shorter waiting list. And you had to pay that much more and they would gradually adjust it against your bills. So there was a sort of a premium for getting a landline. But getting a landline was still a big thing and anyway there were no cellphones.

And the line man was this iconic character, a very, the lowest level of the telephone department, and as the word suggests, he would come and check the telephone lines. So as I said most of the times the telephones would not work. They would just be dead. They would be sitting as instruments. Some satirists in those days used to create a mock funeral for the phone because the phone would be dead, effectively dead, for days. You knew you had to wait. You were at the mercy of the telephone department to come and fix it for you and the lineman would come and as I said,  he was, sort of, the lowest level of whatever the people but he would be treated like a VIP.

Colour television came in the Asiad Games in 1982. So the government decided to give licenses to certain private TV manufacturers. Crown TV was one. So you could actually go the market and buy a Crown TV. It was actually a very terrible TV. The one that my parents had was quite shoddy,  the sound was always not very good but, we bought this TV and obviously because of the license permit only a certain numbers were manufactured.

So I remember this story very vividly. I was I think in college, so the sound control, the sliding thing was not very good. It would either become too loud or too low. So we got this technician from Crown and I think I was complaining to him that this TV set is not very good, so he turned around and said you know ‘ ye TV toh black mein 8,000 ka bikta hai’ (this TV is sold for Rs 8,000 in black). Because there was such premium, scarcity premium on coloured televisions that even this, rather not good TV was being sold at a premium. So that just gave you a sense of the shortage economy you have. The economy has shortages, of consumer goods in particular, and the economy had, basically this is queuing and rationing and this led to a lot of worker arms, if you had an MP contact, if you had knew someone in the government. So that was the, that was the era in which I don’t think, I think a lot of things have changed hugely since those days. 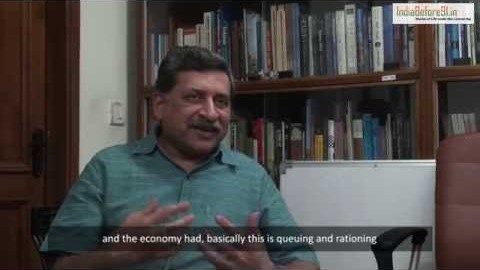