Vishnu Dutta Sharma, recounts his experience of joining AIR in the '70s and the change in technology, exposure, contact and mediation with foreign countries that has followed. He explains how entrepreneurship has flourished in the wake of the reforms, and the capacity of setting up a business which now prevails in every economic strata.

The change in the government is that, at that time, a particular environment had been created, created in the sense that, if I had to meet any MLA or MP or Minister, it was next to impossible. Nowadays, it is very easy. Ministers are available. You can go and discuss your grievances with them, talk to them.  Earlier, this wasn’t possible. There is freedom at the level of the government that public can now attend general meeting or go and talk to the minister individually. There is openness at the level of the government now.

At that time, like I said earlier, there wasn’t much openness. So, we had very less general contact abroad. What was happening abroad was known only by people at the high level or senior officers, the common man or at the middle level, such information wasn’t available. It wasn’t known what was happening there or what was happening here. If something new happened here, it was seen as a big development, even though it had become obsolete in some other places.

Even the private sector did not have many jobs as compared to today. And the government sector had more jobs at that time. However, there are less today.  In private sector there were less earlier, but today there are many. Moreover, many more avenues have developed. A person can easily start his own work/ business. Earlier, it wasn’t easily possible for someone to start their own work. Nobody could even think about it. And now, not only a middle class but also a lower class person can think of doing something on his own, by taking a loan from bank or somewhere. And at that time, this wasn’t possible even for an upper middle class person. So because of this many people don’t even like going in for jobs, they like to work on their own so that they can earn better.

As fars as my childhood is concerned, we didn’t even have Doordarshan. Doordarshan came in late ‘60s, no late ‘50s. It came in ‘58 or ‘59. So in our childhood, we had songs on a radio or a radio program. I belong to a small village and so, the number of radios only were so less, that one didn’t know. If someone had a radio, there 2-4 special programs, one was Krishi Darshan for villages and the other was songs. n those, ‘Vividh Bharti, Radio Ceylon’ was quite famous. So there was radio and later, when Doordarshan started, initially even Doordarshan had very few programs. In late ‘60s, Doordarshan started developing so the number of programs increased. And till ‘70s, Doordarshan had progressed a lot. Villages have prosperity, however, the area of land with people has decreased. But prosperity in the sense that, like I said, the avenues have increased a lot. People from the villages come to small cities, big cities and if they can’t find a job, they start their own work, anything, even something small. So there is a lot of prosperity in the villages. 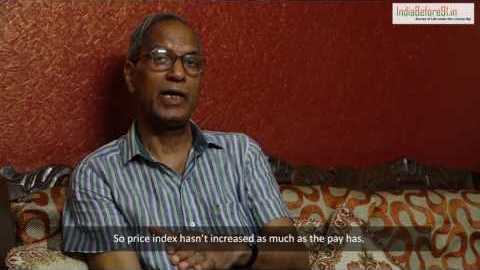