Mr. Hitesh Shankar, Journalist, talks at length about the changing political and economic landscape. He touches upon topics like journalism and choice, and briefly describes the scenario back then.

1991 is an important year that brought about a change in India’s social, political and economic life. I remember that after I gave my 10th class exams, when one wanted to buy various things, they weren’t available in the market. We used to adore our relatives who came back from abroad, at that time owning a SONY TV used to be a big deal. Indians hadn’t heard about brands like Toshiba or Mitsubishi. There used to be a longing during the middle age. A year before the fall of Berlin wall in 1992, India also witnessed a fall in various market walls. There was License Raj, I remember that (leaving competition aside), a company could function using the PP number that was in reality the telephone number of their neighbour and he used to get disturbed. This is how people used to describe it.If anyone called, people used to summon the recipient and then chat and discuss. The later generation, who live in the times of mobile phones cannot imagine those years. There used to be 2-3 types of soaps-Hummam, OK, Lifebuoy; 2 brands of cards- Ambassador and Fiat; Khaki and grey were the kinds of colour available. The realm of life was limited and we could not think beyond that. Fiat used to be the fastest car and in those times we used to read in stories about bandits owning them. Police could not catch up and used to fall behind Fiat. If we make our children study these things, they would laugh. But that was life. Barring insurance, there were not a lot of saving options and the worst premium insurers banked upon those times. People lost  money in firms like PLS; if we compare LIC’s return policy today(after the opening up of private sector) then one generation before us got their cars mortgaged  for the dreams for which the premium was very low; you can call it peanuts. I think it was a different world. My father booked a Bajaj scooter, now if I told you that you would have to book a scooter you would laugh. But we got that booked. The long and tiring wait to own a scooter had such an impact that when our turn came to own one, we gave our number to somebody else because by that time our longing to own a scooter had ceased. Gas stove and cylinder were an important thing. And one had to go to the parliament for telephone. T.V., washing machines, shoes, cloth quality; all these things have changed. There were no options in clothing; they used to be tailor made. There was a pre-conceived notion about readymade clothing that they didn’t fit well. So people had best interest in convenience. We see that the whole landscape has changed. In media too there were a few brands. But print media had special creditworthiness, agreed. In those times media has a different creditworthiness, there was a way of doing journalism. However, there were not many brands, neither in politics or media or anywhere else for that matter. We all have got options, competition and comparison options have made things easier. And society’s convenience options have also opened up, we can also call more business opportunities. So I think, in terms of facilities everyone’s world has changed after 1991. 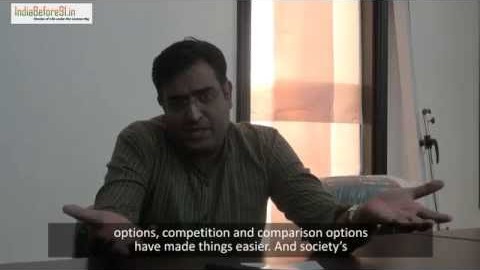