M K Venu elaborates on sectors which have lagged in the period following the reforms, highlighting the poor state of public delivery systems which continue to obstruct our development.

Where we have really failed and which is, which to me is very inexplicable is how we are state, the quality of our state, and its public service delivery, has failed miserably. The state, I would have, I expected that the state would also re-invent itself and its delivery of health services, education, you know, normal services to citizens. Right? Has not even today leaves much to be desired, has not really scaled-up, improved.

Recently, a judge said that there are 31 million pending cases in India and it would take 320 years for them to, at the present pace, for all the cases to be, 31 million cases to be, concluded. So, we have a judiciary which is not scaled-up, which is not delivering right because justice delayed to such an extent, is justice denied. We don’t have justice. Right?

So, in these sectors, we have not been to sort of scale up quality state. Instead state is still meddlesome,, meddling in all kinds of areas where it is not supposed to like, you know, why is state running Air India, for instance, why is state running, you know, needlessly some public sector company wherein it did not, where you know, private sector can maybe do a better job. Whereas there are some I believe, that there are some areas where the state can and should be present, especially, in a country like India where there are so many, still so many poor. So for instance, banking, I believe that the state can run say 6-7 banks, 10 banks but not 70 banks. So, the problem is India is one country where the, where 70% of the total, outstanding banking credit, is accounted for by state run banks. Whereas even in other countries where state run banks do, are present, they don’t have a credit market share of more than 30 %, like Brazil etc. So, we have a huge percentage of market being you know, cornered by the state run banks. Private sector accounts for 30%.

I guess this ratio is also very skewed, it needs to change. And today, India’s banking sector is in a bit of a crisis. And this is one of the big issues being debated even today, whether state run banks should have 70% of the credit market. 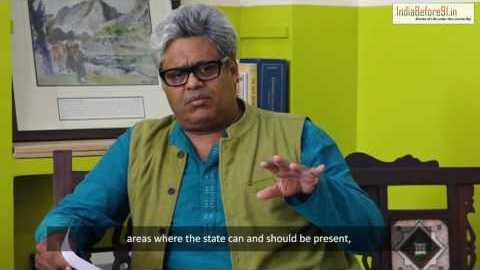