Geeta Gouri, Eminent Advisor at Competition Advisory Services, takes us through an institutional history of liberliasation interventions before the 1991 reforms. She discusses key suggestions by the Hazari Committee (1967), Subimal Dutt Committee (1969), P C Alexander Committee (1978), and the Narsimham Committee (1991) on industrial licensing and import-export policies.

Many of us in this generation are what you can call as ‘midnight’s children’, that is we are, post-1947, some of us are post-Republic and we didn’t know what it was to be a part of Colonial India and a war-ravaged economy. So what we have been looking at is really the Nehruvian India, you know an India which is looking forward to being against colonialism, to be in favour of reaching the commanding heights, and shortages didn’t bother us because we were children of Nehru and all our parents would have been involved in the freedom struggle, in some form or the other.  We were building a greater nation, so, when people do talk about shortages, it is only much later that it starts affecting us, I mean it hits us badly and that would really come up about 1970 or ‘75 or even much later, not before that.

On the question of licensing, and the kind of licensing raj that we had under the Industrial Licensing Policy. The last amendment to that, I think takes place in 1973 but it starts with the second planning, which is the Mahalanobis model with import substitution. The general idea was to look at things in terms of laying a diversified base in a capital-scarce country because there was a lot of labour so we felt labour is very important so we will sort of implicate the labour surplus model and the emphasis was that we create more supply and demand will automatically be created. But again if I look in terms of a timeline, it was what was coming up between then, say, by ‘75 and the mid 80s or ‘85, was the fact that our industries had created a lot of inefficiencies, we were technologically dated, absolutely dated. And this, a large part of it was in the public sector enterprises. You know, our phones were archaic, our HAL the plane I think flew for years together, it just started flying now and one always wondered what was happening. But that was not the concern so much is the fact that with the question of bank nationalisation and more and more spread of the financial institution. There was a tremendous increase in corruption.

So inefficiency went with corruption. And the corruption seemed to be a part, a part of the bureaucracy. If you are a part of the political set up, and the government set up, then that’s the way the money would be done, that’s the way the licensing would take place. And only a few privileged companies would get their licenses. And this was brought out as early as 1967 by the Hazari Committee report, you know, and immediately after the Hazari Committee Report came the Subimal Dutt Committee Report and Hazari Committee Report talked in terms of the need for giving up this licensing system, and allowing for market forces to come in and Hazari was the Professor of Industrial Economics in Bombay University, and also someone who was involved in the Deputy Governor of the Reserve Bank of India, he died very young. And this is a very interesting report because Bombay University, also brought out the criticism against the Mahalanobis, which never was allowed to take it up. In Bangalore, we used to have this Forum of Free Enterprise, very close to the Swatantra Party and then we had people like B.R. Shenoy, and then we had Brahmanand. These are all very well economists, known economists. But its surprising that, this debate on why the Mahalanobis model never took place is something that makes interesting reflections now.

Important point that was never emphasised was the fact, that you have to be open mainly for technology and technological change and for understanding how things can come in. Because openness means competition and market factors functioning and this is what Hazari had emphasised right in 1967. The Subimal Dutt Committee Report that came in a little later, which is i think the dates slightly mixed up, the Hazari Committee came in ‘67 and the Dutt came in ‘69. And Dutt’s response was not a one on markets. There, he, the Dutt Committee emphasised more on the reason for prevention of concentration of economic power. So the licensing had created concentration of economic power and from the Dutt Committee in ‘73, in ’69 was the beginnings of the MRTP - the Monopolies and Restrictive Trade Practices Act and the MRTP was a structural response to a structural situation. It was a structuralist act to the Industrial Licensing Policy. It was not a market-oriented act that came up. And following that in the G.B. Ramakrishna Committee Report, which again started emphasising the need for liberalising and looking at it. Now it, I think the nail was hit on the head by the first Narsimham Committee Report. where it started we have to started saying that we have to start liberalising, even the Alexander Committee Report and India look at it, we started in ‘67, the final liberalisation takes place in 1991. So there is a whole long process that has been, that has taken place. 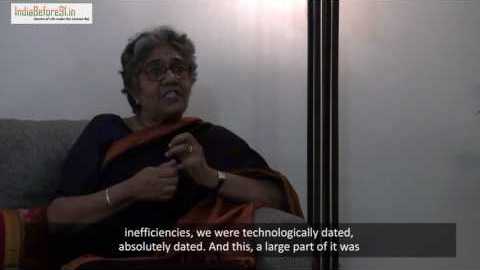