Rajesh Chakrabarti, Executive Vice-President, Research and Policy, Wadhwani Foundation, talks about the four legs of liberalisation. He further delves into the difficulties he faced as a student, wishing to apply abroad for higher education because of the controls that were in place in the pre-91 era. Further, he discusses the entry of the private banks and the revolution of the public sector banking.

The Rodrik-Subramanian thesis was that they make, they draw, distinguish between pro-market reforms and pro-business reforms. And the two things are different. So reforms obviously means unplugging of government controls. But it can just help business and or it could just let market forces decide business. The two things are quite different.

So before that pretty much it was the Industrial Policy, 1956 that was ruling the show and with changes accrue. But by and large sectors that were closed to private and very few that were open and all of that. So that changed. So that is one - Privatisation.

The other leg was trade liberalization, right? Growth caps were removed, MRTP, for example, was removed, which led these mid-size businesses actually grow to larger sizes.

And the third was Globalisation, connecting better with the external world.

Now as during these first 5 years of the reforms, I, myself, completed my MBA from IIM Ahmedabad and took up a job in a public sector development finance institution, IFCI, it’s still there, for one year and then I went abroad for my PhD. So I was applying to universities.

I had to go get foreign exchange and I had an account, I think, with Indian Overseas Bank or something and they said well you go to the Sansad Marg branch between ten o’clock and twelve o’clock, there is a foreign exchange counter which is open where you put in your application and three days later you will be given the drafts, the dollar drafts which you can send to the university. So it was already 1993, not pre ‘91, but it was just. So I did all of that and on the assigned date I went to the counter and they said, well you know what, I can give you only [foreign exchange for] 9 of the universities that you have applied for I cannot give you the tenth university. I said, “Why, what’s wrong?” It turned out that I was applying to University of California, Berkeley and University of California, Los Angeles and according to the rules both cheques, both drafts have to go, have to be marked to the regions of the University of California because they were both are parts of the same university system. According to the RBI rules, according to the banking rules, this meant I was doing something, probably, I was trying to game the system, I was trying to do something. So he said no I cannot give you two drafts for university of California, right?

So I mean just to show the ridiculousness of how these controls are sometimes are comical for want of a better expression. And by ‘94 I had moved to the US. Now the, what in my mind, from the US of course I used to keep coming to India and witnessing India and because I was visiting India in gaps, some of the differences were quite stark. Each time I would come to India, it would look very different from what I had seen two years ago or three years ago. So clearly the country was changing very fast and very visibly and many of these forces, the apparent changes were actually  a result of liberalisation and private sector activity being allowed in many parts of the economy. One thing that I used to see when I used to visit India during that, during the late ‘90s and early 2000s and which is probably true, is the pace of acquiring technology accelerated unusually because of liberalisation. So what was getting developed in the west was now coming to India within months of its development as opposed to decades before.

Its very difficult to disentangle the effects of liberalisation and technology. So for instance , in 1991, if you wanted to get money out of a bank, you would have take a cheque and go to that bank and spend half a day getting money out of its teller. You stand in a queue and get it. Today we cannot even think about it. Today we take out our debit cards and walk into an ATM and get our money anytime, anywhere banking. So that is an effect of liberalisation. I did a whole book on how SBI was transformed only in response to competition from the new banks, ICICI bank, HDFC bank and Axis bank which was previously UTI bank, in particular. So the appearance of these new Banks in the economy in 1994 changed completely the financial sector. And the old public sector banks were pushed precisely by competition to change the ways of their function and it was not an easy move for them. These were like hard ossified, very serious bankers being asked to do things completely differently. Right. They were used to banking where customers lined up to come to their desks whereas ICICI bank next door was having a guy standing right in front of SBI bank, wearing a heap of paper to the guy saying that why, why do you want to have your account in SBI? Our branch is 3 floors down the road, come we’ll give you better services. That was the aggression with which the new banks were seeking customers. And it was a complete change of mindset that the old banks needed to adjust to. And they did that. It has presented new opportunities, it has presented new threats and people have to grapple with completely different sets of opportunities and threats today than they had to deal with in the previous. The certainties and the regularities and the things which we thought would be, would be changeless over lifetimes are now gone. They’ve changed, particularly on a monthly basis now. 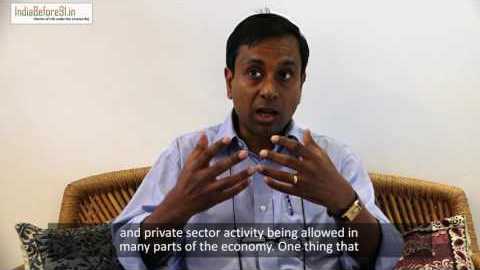