The Birth of Private Media in Wake of Liberalization: Raghav Bahl and Ritu Kapur

The Birth of Private Media in Wake of Liberalization: Raghav Bahl and Ritu Kapur

Raghav Bahl and Ritu Kapur, founders of Network18 and Quint, discuss how liberalization fostered private equity and financial support for those with intellectual capital and impacted independence in production styles of media houses.

Early ‘90s was clearly a seminal point for India. And we, Network 18, when we founded it, we are a complete child of India’s liberalization. Because Network18 would not have been possible in the pre-liberalization era. Why do I say that? A) There was no industry. That industry came about, by a very fortuitous confluence of two things: one is technology. The whole business of satellite TV happened. And India opened up. India did not clobber those signals. India didn’t close those signals, because India was just opening up to the world. These fortuitous things came together, technology and opening up. And then the third fortuitous thing, for people like us, who are first generation entrepreneurs, in the pre-liberalization era, where would you get capital? Either you had family capital, or you were able to, literally, steal capital from banks and build business. There was no private capital. Private equity as a concept or venture capital financing as a concept did not exist in India. Even if it existed, it existed as a very tiny element. But post ‘91, all these things became a part, where if you were a person who had intellectual capital, if you had capability, but you didn’t have financial capital, there were people who were willing to back you and say, fine, we know you know the industry, you have the intellectual capital. We will come in with the financial capital, so we’ll be private equity funders for you, we’ll be venture capitalists for your idea. So all these three things happened in the early 90s in India. And therefore someone like Network 18 is a complete child of these three things. If these three things hadn’t happened, we wouldn’t have existed.

And also, I think what that led to was that the production styles changed, how you created content changed, because otherwise… I remember going and doing a pitch at Doordarshan for a education series on  you know science, and explaining science to kids and resistance, and we came up with a really quirky, cool format which we thought would relate to kids. And I just had a bunch of people sitting across me and said “no, we’ll have a teacher sitting across a table and he will talk and why are you even thinking of all of that”, and you know, “don’t think” was being reiterated constantly, and now when we started with our first couple of shows, which was India Business Report and India Show, we were the first production team, so to say, that turned the camera or eye for instance, or thought of going really up close, or getting into spaces editorially which you would never have, so in terms of what you said, what you spoke about, through your shows or how you shot it, or how you edited it, or the kind of music you used, that completely changed. And I think, I can quite safely say that we were the first people to experiment with new formats and new content styles, and then that spawned a whole generation of content creators, which wouldn’t have been possible.

And then a whole industry was born.  I mean today you’ve got 800 TV channels, people doing the kind of work which is as contemporary as in the West, because you are exposed to all those techniques and technologies. I mean, a 24 gets made in the West, a 24 now gets made by India technicians in India as well. So, or look at our feature films, from Bollywood. Some of them are using CGI and other production techniques which are as good as anywhere in the world. That’s all a function of an industry which opened up, which allowed private capital, which liberalized, which allowed global capital, global content, global influences, and therefore, you know, in one word, it’s a totally different world what it was pre ‘91. 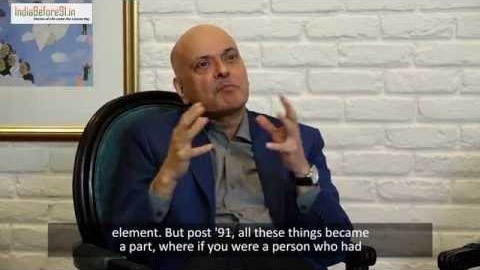