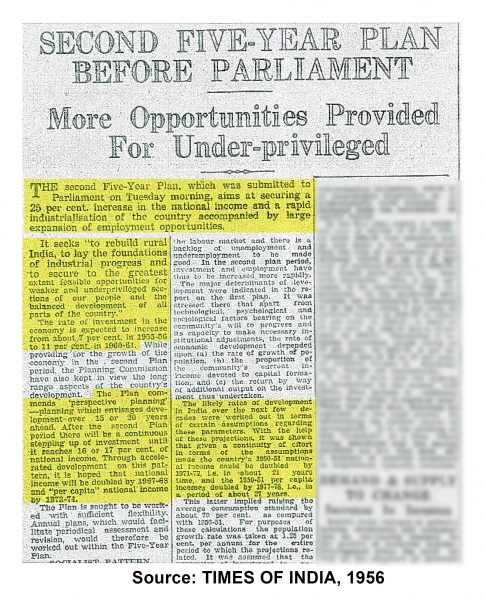 The Second Five-Year Plan, which was submitted to Parliament on Tuesday morning, aims at securing a 25 per cent increase in the national income and a rapid industrialisation of the country accompanied by large expansion of employment opportunities.

It seeks "to rebuild the rural India, to lay the foundations of Industrial progress and to secure to the greatest extent feasible to opportunities for weaker and underprivileged sections of our people and the balanced development of all parts of the country."

The Plan commends 'perspective planning'-planning which envisages development over 15 or 20 years ahead. After the second plan period there will be a continuous stepping up of investment until it reaches 16 to 17 per cent, of national income. Through accelerated development on this pattern, it is hoped that national income will be doubled by 1967-68 and "per capita" national income by 1973-74.

The likely rates o development n India over the next few decades were worked out in the terms of certain assumptions regarding these parameters. With the help of the projections, it was shown that given a continuity of efforts interns of the assumptions made the country's 1959-51 national income could be doubled by 1971-82 I.e in about 21 years time, and the 1950-51 per capita income doubles by 1977-78 I.e in a period of 27 years.

This letter implied raising the average consumption standard by about 70 per cent as compared with 1950-51. For purposes of these calculations the population growth rate was taken at 1.25 per cent per annum for the entire period to which the projection related.