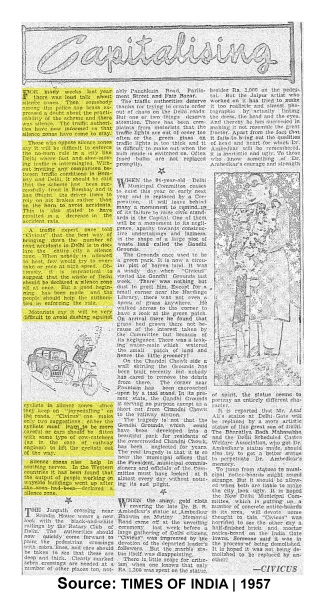 For many weeks last year there was loud talk about silence zones. Then somebody among the police top brass expressed doubt about the practicability of the scheme and there was silence. The traffic a thought 80s have now informed us that the silence zones have come to stay.

Those who oppose silence zones say it will be difficult to enforce the no-horn rule in a city like Delhi where fast and slow moving traffic is intermingled. Without inviting any comparison between traffic conditions in Bombay and Delhi, it should be said that the scheme has been successfully tried in Bombay and it has .The driver there to rely on his brakes rather than on the horn to avoid accidents. This is also stated to have resulted in a decrease in the accident rate.

A traffic expert once told "Civicus" that the best way to bringing down the number of road accidents in Delhi is to declare that the entire city of silence zone. When nobody is allowed to hoot, few would try to overtake a race at high speed. Obviously, it is impractical to suggest that the whole of Delhi should be declared a silence zone all at once. But a good beginning has been made and the people should help the authorities in enforcing the rule.

Motorists say it will be very difficult to avoid dashing against cyclists in silence zone since they keep on "jay pedalling" on the roads. "Civicus" can make only two suggestions: either the cyclist must learn to be more careful or cars should be fitted with some type of cow-catchers (as in case of railway engines) to lift the cyclists out of the way.