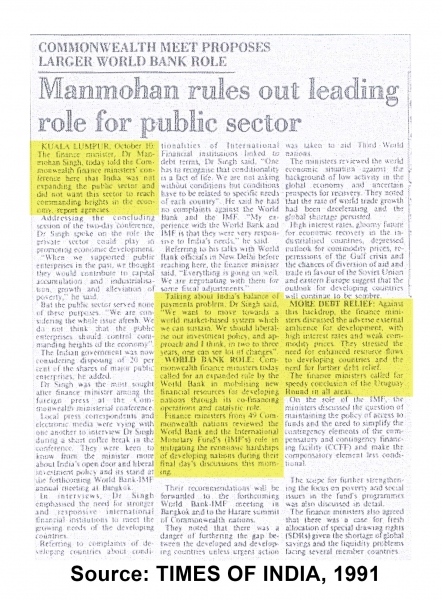 The finance minister Dr. Manmohan Singh today told the Commonwealth finance ministers' conference there that India was not expanding the public sector to reach commanding heights in the economy, report agencies.

Talking about India's balance of payments problem, Dr Singh said, "We want to move towards a world market-based system which we can sustain. We should liberalise our investment policy and approach and I think in two to three years, one can see a lot of changes."

Finance ministers from 49 Commonwealth nations reviewed the World Bank and the International Monetary Fund's (IMF's) role in mitigating the economic hardships of developing nations during their final day's discussions this morning.

MORE DEBT RELIEF: Against the backdrop, the finance ministers discussed the adverse external ambience for development with high interest rates and weak commodity prices. They stressed the need for enhanced resource flows to developing countries and the need for further debt relief.