The Shortages Economy of the Past: Bibek Debroi

The "Shortages" Economy of the Past: Bibek Debroi

Mr Bibek Debroy, a member of NITI Aayog and Professor at Centre for Policy Research (New Delhi), brings to our notice the big leap that the Indian consumer durables industry has taken. He shares interesting anecdote relating to a successful telephone installation, a feat he achieved in India before 1991.

Every Indian who went abroad then used to wear Bata shoes. And you can go and check, everyone, there was one particular brand of Bata shoes called Ambassador, so every Indian male who went abroad, I don’t know about females,  would wear Ambassador shoes from Bata because there was nothing else that was available. So what has really changed because that has been liberalised by today is consumer goods, not just particularly fast moving consumer goods but also consumer and durables. And I don’t know how many people know that a member of parliament even had a discretionary quota in the early 80s for HMT watches, because HMT watches were also in short supply. If I mention it to my sons, they would look at like something crazy, there was no watch available you see. I was delighted when I moved into standard 9 and my father gave me his old HMT watch which had gone back 30 years. Those days you did not change things you see, because you got all of this with such a great deal of difficulty. Cars are an example of that, and I am not very sure how many people know that until not very long ago there was a ceiling of Rs.35,000 on the price of an automobile.

You bought second hand stuff because there was a shortage of first hand stuff. And whether it was a television or whether it was a fridge, you essentially bought it for life. This entire concept that I junk it after 5 years-6 years……..never happened including for computers. And again people don’t remember those were the days of even after 1991, or around 1991,those were the days of 500 floppy tapes and you were delighted if you got a 286 computer, and it only had word stop. But anyway I sort of digress. We had to wait for one year to get a telephone connection and when the lightsman turns up and in those days you used to have a telephone directory for Delhi which was in two volumes, I think if I remember right A-M and N-Z. So he turns up, installs the telephone and I said what about the directory, so he produces one volume of the directory, no actually he just hangs around, so then I fished into my wallet, took out Rs.10 note and gave it to him and he gave me one volume of the directory. I mean he went down, came back with one volume of the directory, so I said what about the second volume, he said sahib you get only one volume in Rs.10. So we do not realise that in those days because of the shortage there was bribery. I am not saying that all bribery was accounted for by shortages but certainly shortages led to bribery. I remember this was 1992-93 whereabouts, where we went to a transition where it was not a market determined exchange rate, it was a partial kind of a thing called Lowe’s then, it was a dual exchange rate structure. I walk into a bookshop in Vasant  Vihar and I find two copies of the same book priced differently in rupees. Why? Because there were imported on different dates. The exchange rate was different. Now, that’s pure logic. But in a system where you are used to things being fixed for a number of years there is sudden sort of change.This is what reforms are also about, it is about uncertainty which is desirable. When I moved to Delhi as a student, one of the things was that you only got the milk between this hour and that hour. If you did not go; and I forget what it was 5 to 6 or 6 to 7, something like that in the evening, you didn’t get milk. So, like I said you have one perspective when you were running your household. You have a different perspective when you are in someone else’s household, even if it is your father and your mother.So I do have a recollection that you have to go at this time to go the milk supply booth to get the milk otherwise you are not going to get the milk. I think the main impact of the reforms is two different things, one is, you have a generation which has either been born after 1991 or has grown up after 1991. That generation is not used to the shortages. 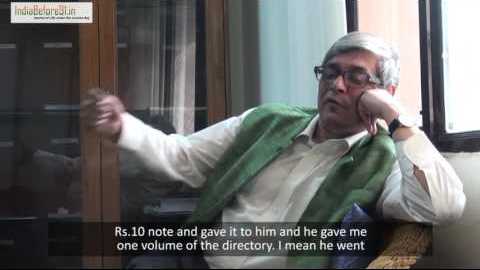