Mr Vikram Bajaj has previously served as the Managing Director of Uncle Chipps since 1986 till 2000, and presently serves as Managing Director of Inlingua, New Delhi. He talks about manufacturing licence being a coveted possession in 1991, and about the rat race to obtain one, since people were desperate to practice entrepreneurship.

Well we are just talking about time and the life before 91 and that was a very different era for India. It’s like a completely different world. Like I now live in Ghaziabad, a really sleepy little railway town. And my father says that the main road, which was the main G.T. road was so light on traffic that they would play cricket on it. Today it’s unimaginable. There are at least 50 to a 100 vehicles crossing any one point on that stretch every minute or every two minutes. And whereas earlier maybe, I remember that ours used to be practically the only car in town, today everybody has their Audis and Mercedes on the streets. In my childhood days getting an icecream was a challenge, I think they wern’t in Ghaziabad, we had to go to Delhi to fetch one. Today of course you have a mall right in front of the house and McDonalds and Pizza Hut with it. So it’s a real sea change. I mean in personal life of course there was the lack of choice as a consumer. We only had few items and very few brands and that was because everything, every economic activity was very tightly licenced and controlled by the government. Producers were not just free to produce whatever they wished, they wanted to, they had to take a licence from a government order to produce anything .I belong to an industrial house, one side of the family which was in industry and our main business in the last 70 years had been head belongings particularly Vanaspati and refined ones. And in those days if you get a licence, it was almost a licence to print money, because essentially competition was restricted to other people who managed to get a licence. There were always shortages and that meant there were always rent seeking happening, profits to be made simply by producing something sometimes even of substandard quality. For the consumer it was hell, archaic choices. Also very few job options. Of course entertainment was practically non-existent. You had black and white Doordarshan being in your house for just a couple of hours every evening as opposed to the profusion of channels which you can barely keep track of today. I remember that whenever there was a change in policy by the government, let’s say liberalising a licence, or allowing maybe a hundred and thousand of tons of manufacture to be done in a particular industry, there would be a race to the ministry to obtain that licence and all the big industrial houses were vying for that very coveted licence to expand their capacities. So clearly the system rewarded not those who were most efficient or perhaps invest in terms of their quality, they were not the ones who were able to expand. They were always the ones who could dandle a licence. And finally in the fellious or terit circus of people who were industrialist and therefore had access to some licences and perhaps were in on the game. It didn’t matter which industry. The question was that if you had become rich, having had one licence and created an industry which was printing money then you wanted to invest in more such industries and if it wasn’t available in your particular field then you chased whatever licence was available in whichever field because the story would not be very different and so you had the odd situation where an edible oil manufacturing company like harz went into paper manufacturing because suddenly paper manufacturing was liberalised perhaps based on agricultural residue or whatever there were some particular policy which allowed paper mills based on agricultural residue to come up and suddenly that was an opening to invest and we were one of those who invested in paper as an industry. But it was a very different experience then, it was a very exclusive club of people who were in industry and if you look back its really odd. It’s almost like a new raja system, you know where the old rajas were of course the ones who were blessed by the British with their kingdoms and the new rajas were the ones who managed to run and get a licence and produce something. 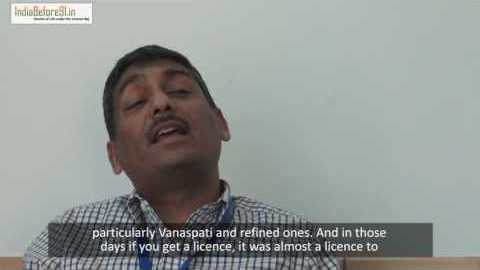