Maya Mirchandani, Foreign Affairs Ed/Anchor at NDTV, discusses working in media in the late 1980s and early 1990s. She gives us a glimpse of the behind-the-scenes protocols behind The News Tonight.

Yeah I began working in ’94 in the media but I was working for a news agency for a brief time and then I joined NDTV before that. At that time we had, we had just started, NDTV had just started The News Tonight which was a nightly news broadcast which would air on Doordarshan’s Channel 2, Monday to Friday. So it was recorded in the evening in our studio and then the tape was physically taken across to Doordarshan at that time and it would be aired later. So it wasn’t live telecast. But I mean, it was the first private daily news bulletin I think on Indian television at that time. Well see I mean my internship with Newstrack I was to low down in the food chain to really know what was taking place in editorial decision making but the sense one got that because it was a video news magazine and not broadcast, there were different kinds of restrictions at play. But those never really filtered down to us as interns or researchers. We were told to go out and transcribe interviews and we did that. With ANI again, there was a symbiotic relationship between Doordarshan and State-run media and agency because the agency was also providing unfiltered video to foreign agencies. So you had one side of it where there were restrictions and what you could say and other side where things were going out and it was being broadcast by the BBC or Reuters or whatever have you. NDTV was a different learning curve. So with NDTV when The News Tonight began, I think it was in April 1995 when I joined them in July. As I said we had to essentially send our tapes in to Doordarshan for broadcast. A ready tape was sent in. We were recorded live in our studios but the actual package was sent in. But our script had to be sent in to Doordarshan in time. There was censorship. There were things you could say and could not say and there were daily arguments about what was okay and what was not okay. So anything overly critical of the government, you had to go back and forth, back and forth. That process did happen when we began The News Tonight and it pretty much was the case until we went to Star, where then things became different. I mean that change took place in 1996, I think we went to Star TV. Because NDTV was I mean, it still continues to be, although it’s a broadcaster today, at that time was a private production house. So, we moved in 1996 to Star TV and we did much more programming for them. The restrictions were fewer. But even then we were not broadcasting live necessarily. It would sort of be recorded, in the initial stages. But then we eventually began recording live for Star but there was like a two minute delay. So we had to keep in mind we could not be “live-live”. So there was a lag and things like that. But we worked with a censorship. I mean, we had no choice because that was the platform that we were broadcasting on. But it was a daily struggle and many reporters very often would throw tantrums. We had come from colleges where we were told to be you know, as journalist you had to speak the truth, you have to say what you see, say it as you see it. And here everyday we were dealing with somebody saying that, no you can’t say this and you can’t say that, and you can’t say something else and re-write this. So we had somebody in the newsroom who interfaced with Doordarshan. So we as journalists wrote our stories and sent it in to the editors and then they had the job of dealing with Doordarshan. So there was a removal in that sense. 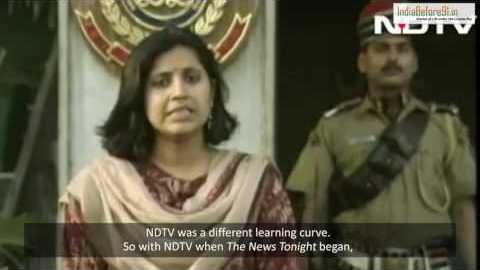