Prof Jayati Ghosh speaks about the failure of political economy in developing social and physical infrastructure across the country. She explains how smallholder enterprises continue to face the brunt of repressive state apparatuses, such as police and inspector raj.

I think that we did two things that were fundamentally wrong and these reflect a deeper political economy failure which I will come to. The two things we did wrong were that we forgot the critical role that the state has to play in infrastructure and I mean both physical and social infrastructure. Physical infrastructure, of course in terms of roads and dams and energy and all of those things, and social, in terms of, you know, the schooling, the health infrastructure and all of that. We’ve neglected these utterly, in the last 25 years and I think, that is really why we have ended up with such an unbalanced economy.

And the other thing that we got very wrong is in terms of, shall I say, the entire area of smallholder enterprise. And here I’m referring to both agriculture and industry and small services. Our entire focus has been on large corporates. It’s as if large corporates are the only key to development, to growth, to prosperity and so on. And we know that’s not true. We know that they will never be enough to employ all the people. They will never be enough to raise aggregate productivity in the economy. So we really have to have a focus on what we do to actually, that huge sector, of the small scale and self-employed. So, those were the two big failures.

For me, these are related to an underlying failure which is something that has persisted in the post-independence period. And it is common to the import substitution phase and to the liberalisation phase. And that is the inability to discipline the capitalist class, if you like. Because you know India is a mixed economy, we were more of a mixed economy but still a mixed economy but less public now. But we’re not a successful one. The successful mixed economies, particularly in East Asia, Japan, Korea, China and some of the successful mixed economies have all had one critical feature in common which is that they all provide a lot of incentive to capitalists but they also have a lot of disciplining power. And we have lacked the second. In the import substitution phase we didn’t discipline them so they completely distorted it. They went haywire with it and they made it a travesty of what it was meant to be. And in the liberalisation phase we haven’t had it. So that, in so far we had development, it has always been by offering more and more sops, more and more incentive and then when those are not good enough, they say reforms have stalled. So ‘give us more incentives, give us cheaper land, give us you know’, etc. So I do believe that we could have gone another way. Of course it depends on the political economy. You just can’t say it depends on the technocratic government that can decide it. It depends on how the social and political forces are playing out. Unfortunately, they didn’t play out in that way.

What happened was not just reduction of control, but really a massive increase in the incentives to large corporate capital. Okay. On the other hand, the huge bulk of small capital, shall we say small enterprises, urban, rural, semi-urban, agricultural, manufacturing. They’re still under massive control. They’re still having to cope with all kinds of inspector raj. They still have to fight every time for you know. You ask the fellow selling bananas how many people he has to pay “hafta” to, to be allowed to push that cart with bananas on it. You ask the people who are small-time weavers in rural areas. How many people they have to actually deal with. So I think the large body of actual small entrepreneurs and we have to remember, they’re also businesses. Business doesn’t only mean the Ambanis and the Tatas and the Adanis. We have really not made life that much easier for them either in terms of the regulatory structures or the day to day kinds of power oppression that they face. I mean sure there have been some things. It did unleash growth, there is no doubt about it. Some of that growth did translate into,you know into, certainly, more urban incomes and the upper 20% of the rural incomes. However I do think that it leads to a dramatic increase in inequality. The nature of that growth entrenched these existing social divisions which I think are absolutely appalling and which we are unique in the world in having so many of them and so deeply entrenched. I am very happy now that there are social movements that are questioning them at every level and I do hope that these gather more steam.

But, therefore, what we’ve had is an economy which is not unequal your standard US inequality kind of way. We have a very particular kind of inequality. And it’s based on location, rural-urban, it is based on your education level,  it’s based on your caste, it’s based on your gender, it’s based on your religion, it’s based on your language, it’s based on your ethnic group. So it a very, very complicated thing. But our economic growth process has actually accentuated all of this which I believe is unfortunate. And I think that has been a part of the reason why it has been very unusual in that we’ve had all this growth without doing what any other society would consider as basics. I mean 40% of rural India without electricity, you know, so many of our children not finishing school, terrible health conditions for 90% of our population, you know these are the basics, terrible nutrition indicators worse than sub-Saharan Africa. Most societies would think that these are the base and then you do the other stuff. So I do believe, our ability to have this growth and create this image of becoming an economic superpower, without granting the minimum conditions of basic life to a very large part of our country, is a reflection of those inequalities. In other words, we began with them, we accentuated them, and that is given as distorted growth. I think it’s also bad because it is a very bad signal for the future. You will not get a stable economy. You will not get stable politics. If you have that kind of inequality and that in turn throws into question your potential growth. 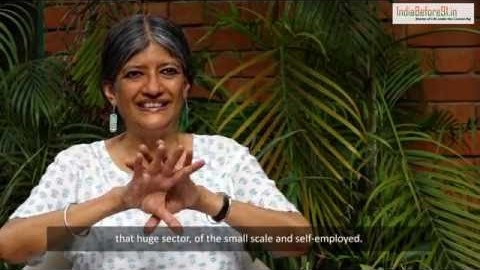