Raghav Bahl and Ritu Kapur, founders of Network18 and Quint, emphasise the difference in the media industry between the 20th and 21st century. They precisely differentiate it briefly in terms of availability of choice, and then enumerate further, citing various other differences.

It was twice different right. It was pre liberalisation. It was the 70s-80s. So India itself was very different. And then Doordarshan is so different from the private sector enterprises that have spawned post-liberalisation. It was a bureaucratic world. We used to go out with very clunky equipment, with a lot of people. It used to take a lot of time to get things requisitioned. The kind of stories we would also do, you know you never went looking for controversy. You went looking for pretty straightforward information pieces. And there was no need to scream and get anyone’s attention because you were the only guy in town. There was no other platform. So it was a totally different world. The best graphic way I can describe it is: it was a black and white world. I don’t think we had entered colour and choice. So that’s the one thing as far as media is concerned, as far as generally life is concerned. Very uni-dimensional life, without any choice. We only had one Doordarshan and even radio wasn’t that sought after. So, yeah it was, you know, media wasn’t that big a part of our lives as students because it was so small, there was so little media. Yeah, I mean for me it was slightly different. I think Raghav’s right we didn’t watch so much television and FM radio didn’t exist. So you would sit and listen to radio programmes in the evening as a family. I remember there used to be that “Junglee Toofan Tyre Puncture” which we used to sit and listen to as a family how we used to sit and watch TV as a family. We don’t even do that anymore actually. But the only thing I would say is that in my college days, media was little accessible, largely thanks to “Yuvavani”. I think there used to be these radio shows that we could go out and do. So my first exposure to media, really was thanks to All India Radio when I was given some equipment. I don’t know what it was, what’s it called but it was some audio equipment and you were told to go out and pretty much do what you wanted with it, which, I have forgotten the name of that radio show “the roving microphone”( Thank you), that we used to do and I don’t think it was all bad. I think it was much more accessible. There weren’t as many people vying to be in the media. So I have a clear memory of beginning to think content, editorial, how to project yourself, how to control or modulate your voice. All of that thanks to All India Radio.

So, one thing is very clear that one word would encapsulate everything- choice. But I think you could break it down further. The kind of global content that we are now exposed to never used to happen before liberalisation. We were pretty much in a silo and the odd Hollywood film would come and the odd Lucy kind of television show would come in and we would watch it. But now you get exposed to global media on the day on which the rest of the world gets exposed to it. So global media, choice, use of technology to reach consumers, either digitally or through linear television and the ability to get revenue out of the consumer. The ability for the consumer to pay for the content. The ability to now watch time shifted content, non-linear content on OTT platforms. Even on DTH platforms your ability to record and then watch a show later. All of these innovations have happened in the last decade to fifteen years. So therefore, if you wanted one word it’s choice, if you wanted several examples that I have just read them out for you.

The atmosphere, I can tell that from my point of view where someone who was completely stifled. It was a strange world. I went into MCRC Jamia, in a world which was only Doordarshan and so you wanted to say okay, what is my platform outside of Doordarshan and you wanted to become a documentary filmmaker since that was the only way you could have a voice which was outside of the government controlled media platform. And two years hence when I came out of Jamia, the world had changed and there was the beginning of satellite television coming into India. So it was such a breath of fresh air because and you know, I have personally come to watch (what) Raghav was planning to at that point and it was fantastic. It was just incredible. The world that I went away from, the world I came back to had changed.

Yeah, you know, there was no private television, as Ritu said there was a very tiny bunch of documentary filmmakers who would look for platforms on which they could put things out and there was the big Bollywood industry if you wanted to get into feature films or there was Doordarshan, a government controlled media. There was nothing else. So there was no industry.

I just have this view that as we were growing up and that’s the pin off from his romanticism of the 70s or 80s, because there was Doordarshan as a child I grew up watching “Krishi Darshan”, so I knew about farmers problems and all, whether I liked it or not, I used to still watch it. I was exposed to Eastern European cinema because DD used to put that out, I was exposed to the Malborn and fantastic shows like “Bharat Ek Khoj”. So I as a child, I feel I had a much more complete and holistic view of what was going on whereas my kids, when they had been growing up, partially my doing I think, they would watch Cartoon Network, you know, so their view was a little Tom-and-Jerry and then you force them to watch other stuff. I think we grew up knowing a little more about everything but if I had to choose that and the choice of watching what I want, the choice is definitely the one to go for. 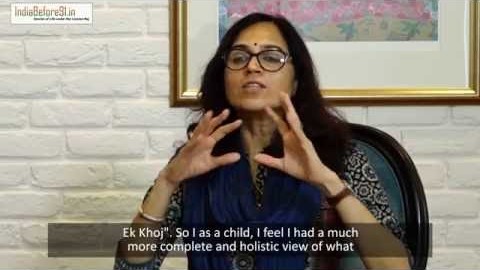