Mr. Amir Ullah Khan, Development and Trade Economist, argues that a poor regulatory framework due to lack of government intervention made India lose out on 10-12 years of effective productivity. He draws a distinction between “control” and “regulation”, and stresses the need for the latter.

As the narrative moved from control to reform opening up, there was a strange kind of acceptance, interestingly from the government sector. In fact it went to a huge extreme where the government, when I joined it, almost everybody thought that this was the end of government and there will be no role for the government anymore. So in the early 90s the idea was that it will be entirely private sector led. There will be really nothing except maybe the military, which the government will run and maybe some aspects of tax collection. The pendulum then swung a little bit, 10 or 15 years later when suddenly the government came back and realised that no, it was not going to be all private sector; that there are areas where governance is still very critical and that is when we realised much later in the day and therefore we missed some of that buses which is that we did not build up an adequate regulatory mechanism that is important for an open economy. And that is why we lost out on those 10-12 years where we thought, where we just gave up and said that government is useless, it has no role and therefore it should just recede. And after all the various scams and so on that we saw we realised, no the government has a very important, far more important regulatory role to play in an open environment than ever before. But that requires a great deal of training and sophistication and knowledge and skills and that we have started building rather later in the 80s. And that is why you will find that most of the opposition or most of the scepticism to India’s growth comes from the fact that India has a poor regulatory framework, a pure bureaucratic structure. One thing I remember very well which is so evocative of the pre reform period was the placement season. So you wait for these two or three firms to come, purely public sector firms, offer you ridiculously low salaries of about a 100 Dollars a month and get delighted when 10% of us would get very low paid jobs. So, I remember that when we were in ’87, graduating out of engineering college and getting a job, some of us very proudly and arrogantly said that I will, in 5 years time, buy a scooter. That was the level of our aspiration and our expectation, because that was the kind of era that was then. So that was the Hyderabad at that time, a very small city, it hadn’t yet seen the explosion that it later saw by way of a reform in the service sector and it became a very large economy of the call centre type. And we had to, people like us had to move from one government job to another. I remember those days very well, these were the 80s where we were trying to opt for a career and the only career at that time was engineering. That’s one of the major issues of the pre-reform era because what used to happen then was that in the absence of service industry, the only industry that we could find work in, was the manufacturing sector and therefor you would find this very hilarious situation that you later see in films like Three Idiots, where every south Indian was told to become an engineer because there were no other jobs. But what we have definitely changed is the number of jobs and the number of opportunities and the fact that there is a far greater choice of career than there ever was. Some of us students went to Nepal in December where it was really cold. For poor south Indians that minus two degrees was desperately cold. But we were going from an iron curtain India. So what did we have? What did we buy? The first thing we reached Kathmandu was a bottle of Fanta and because that was what liberalisation, open market meant for us. And there are so many issues that I can talk about. The peak thing I see is that opening up and liberalisation enabled us to understand that the solution to demand is supply. The solution to demand is not control. Earlier our idea was that if people demand something then stop them from demanding it and that will cause, that will sort, that will be the solution. Today we know that if people demand a product, let people who want to supply. And when you allow a lot of them to supply then the price will come down. That’s been a big learning of liberalisation and that I think is a learning that percolates to every level of India’s citizen. 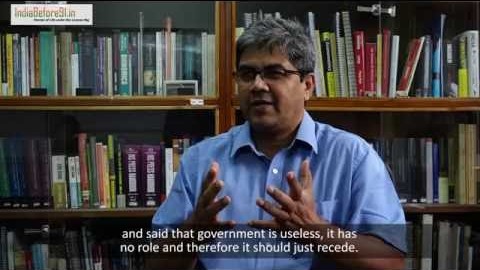