Wasteful Expenditure By Government | 29 May 1957 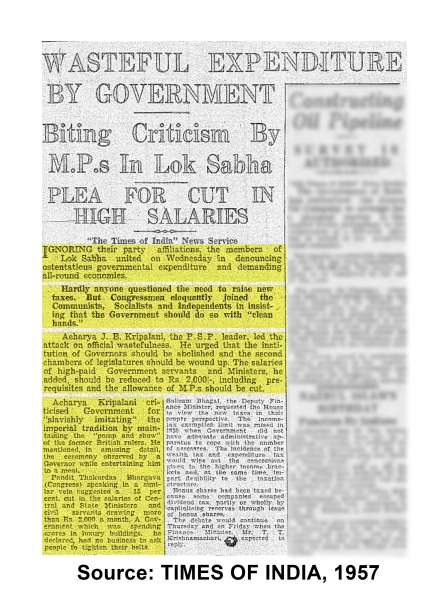 Hardly anyone questioned the need to raise new taxes. But Congressmen eloquently joined the Communists, socialists and independents in insisting that the government should do so with "clean hands".

Acharya J. B. Kripalani, the P.S.P leader, led the attack on official wastefulness. He urged that that in sister institution of governors should be abolished and the second Chambers of legislatures should be wound up. The salaries of high-paid government servants and ministers, he added, should be reduced to Rs.2000 in, including prerequisites and the allowance of MPs should be got.

Acharya Kripalani criticised the government, for "lavishly imitating" the Imperial tradition by maintaining the "Pomp and show "of the former British rulers. He mentioned, and amusing detail, the ceremony observed by a governor while entertaining him to a meal.

Pandit Thakurdas Bhargava (Congress) speaking in a similar vein suggested a 15 per cent cut in the salaries of Central and state ministers and civil servants drawing more than Rs.2000 a month. A government which was spending crores in luxury buildings, he declared, had no business to ask people to tighten their belts.