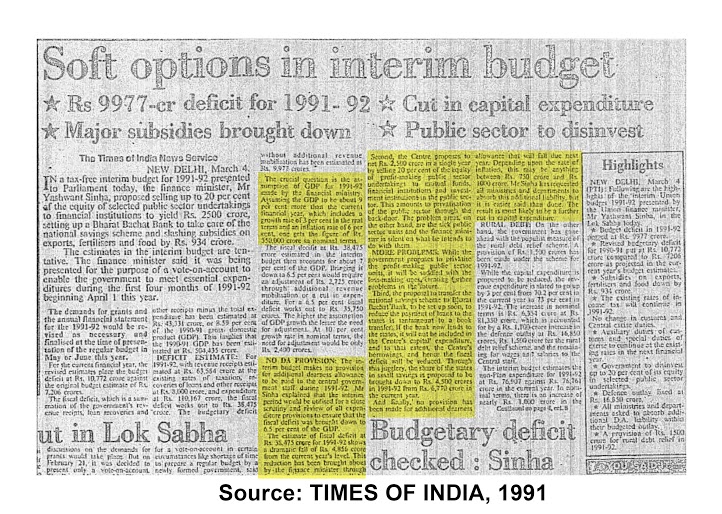 The crucial question is the assumption of GDP for 1991-92 made by the financial ministry.Assuming the GDP to be about 9 percent more than the current financial year,which includes a growth rate of 3 percent in the real terms and an inflation rate of 6 percent,one gets the figure of Rs. 3,50,000 crore in nominal terms.
The interim budget makes no provision for additional clearness allowance to be paid to the central government staff during 1991-92.Mr. Sinha explained that the interim period would be utilized for a close scrutiny and review of all expenditure provisions to ensure that the fiscal deficit was brought down to 6.5 percent of the GDP.
The estimate of fiscal deficit as Rs. 38,475 Crore for 1991-92 shows a dramatic fall of Rs. 4,856 crore from the current year’s level.This reduction has been brought about by the Finance minister through four soft options .
Second,the Centre proposes to net Rs. 2500 crore in a single year by selling 20 percent of the equity of profit-making public sector undertakings to mutual funds,financial institutions and investment institutions in the public sector.This amounts to the privatization of the public sector through the back-door.The problem areas,on the other hand,are the sick public sector units and the finance minister is silent on what he intends to do with them.
MORE PROBLEMS:While the government proposes to privatise the profit-making public sector units,it will be saddled with the loss-making ones,tracing further problems in the future.
Third,the proposal to transfer the national savings scheme to Bharat Bachat Bank,to be set up soon to reduce the payments of losses to the states is tantamount to a book transfer.If the bank now lends to the states,it will not be included in the Centre’s capital expenditure,and to that extent,the Centre’s borrowings,and hence the fiscal deficit will be reduced .Thorugh this jugglery,the share of the states in small savings is proposed to be brought down to Rs. 4500 crores in 1991-92 from Rs. 6710 crore in the current year.
And finally,no provision has been made for additional clearness allowance that will fall due next year.Depending upon the rate of inflation,this may be anything between Rs. 750 crore and Rs. 1000 crore.Mr. Sinha has requested oil ministers and departments to absorb this additional liability,but it is easier said than done.The result is most likely to be a further cut in capital expenditure.