ASSOCHAM FOR THRUST TO LIBERALISATION | JUNE 1991 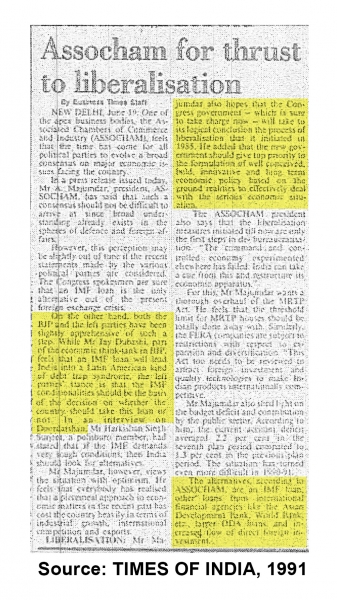 On the other hand both the BJP and the Left parties have been slightly apprehensive of such a step. While Mr. Jay Debashi, part of the economic think tank in BJP, feels that an IMF loan will lead India into a Latin American kind of debt trap syndrome, the left parties stance is that an IMF conditionalities should be the basis of division on whether the country should take the ban or not.

LIBERALIZATION: Mr. Majumdar also hopes that the Congress government- which is sure to take charge now - will take to its logical conclusion the logic of liberalisation that it initiated in 1985. he added that the new government should give top priority to the formulation of well-conceived, bold, innovative and long term economic policy based on the ground realities to effectively deal with the serious economic situation.

The alternative according to Assocham are an IMF loan, other loans from international financial agencies like the Asian Development Bank, World Bank, etc, larger ODA firms and increased flow of direct foreign investment.