AJIT RULES OUT NATIONALISM I April 1990 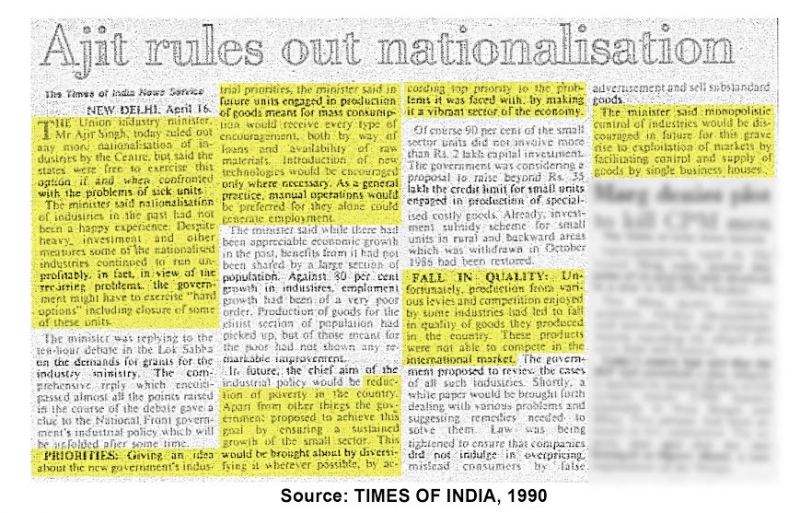 The Union Industry Minister, Mr. Ajit Singh,today ruled out any more nationalisation of industries by the centre,but said the states were free to exercise this option if and when confronted with the problems of sick units.
The Minister said nationalisation of industries in the past had not been a happy experience.Despite heavy investment and other measures some of the nationalised industries continued to run unprofitably.In fact,in view of the recurring problems,the Government might have to exercise "hard options" including closure of some of these units.
PRIORITIES: Giving an idea about the new government's industrial priorities,the minister said in future,units engaged in production of goods meant for mass consumption would receive every type of encouragement,both by way of loans and availability of raw materials.Introduction of new technologies would be encouraged only when necessary.As a general practice,manual operations would be preferred for they alone could generate employment.
Reduction of poverty in the country.Apart from other things the government proposed to achieve this goal by ensuring a sustained growth of the small sector.This would be brought about by diversifying it wherever possible,by according top priority to the problems it was faced with,by making it a vibrant sector of the economy.
FALL IN QUALITY:Unfortunately,production from various levels and competition enjoyed by some industries had led to fall in equality of goods they produced in the country.These products were not able to compete in the international market.
The minister said monopolistic control of industries would be discouraged in future for this grave rise of exploitation of markets by facilitating control and supply of goods by single business houses.