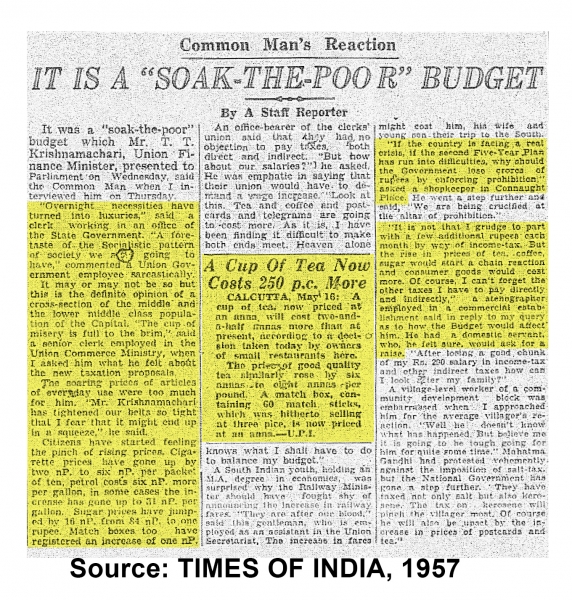 “Overnight necessities have turned into luxuries,” said a clerk working in an office of the State Government. “A foretaste of the Socialist pattern of the society we are going to have,” commented a Union Government employee sarcastically.

It may or may not be so but this is the definite opinion of a cross-section of the middle and the lower middle class population of the Capital. “The cup of misery is full to the brim,” said a senior clerk employed in the Union Commerce Ministry, when I asked him what he felt about new taxation proposals.

Citizens have started feeling the pinch of rising prices. Cigarette prices have gone up by two nP to six nP per packet of ten, petrol costs six nP more per gallon, in some cases the increase has gone up to 31nP per gallon. Sugar prices have jumped by 16 nP, from 84 nP to one rupee. Match boxes too have registered an increase of one nP.

A Cup Of Tea Now Costs 250 p.c More
A cup of tea, now priced at an anna will cost tow-and-a-half annas more than present, according to a decision taken today by owners of small restaurants here.
The price of good quality tea similarly rose by six annas to eight annas per pound. A match box containing 60 match sticks, which was hitherto selling at three pice, is now priced at an anna – U.P.I

“If the country is facing a real crisis, if the second Five-Year plan has run into difficulties, why sould the Government lose crores of rupees by enforcing prohibition,” asked a shopkeeper in Connaught Place.
“It is not that I grudge to part with a few additional rupees each month by way of income-tax. But the rise in prices of tea, coffee, sugar would start a chain reaction and consumer goods would cost more. Of course, I can’t forget the other taxes I have to pay directly and indirectly,” a stenographer employed in a commercial establishment said in reply to my query as to how the Budget would ask for a raise.