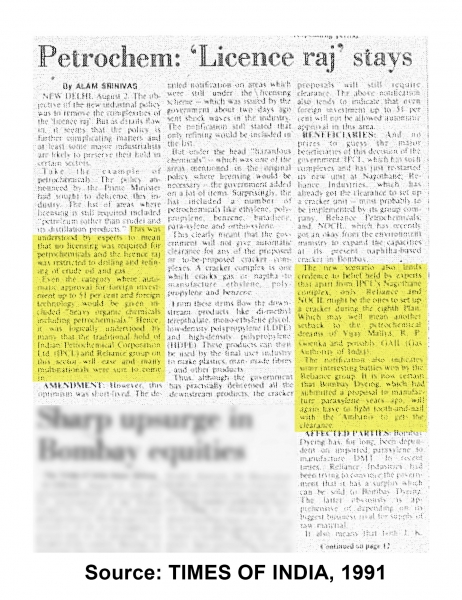 This was understood by experts to mean that no licensing was required for for petrochemicals and the license raj has restricted to drilling and refining of crude oil and gas.

Even the category where automatic approval for foreign investment up to 51 per cent and foreign technology would be given included "Heavy organic chemicals including petrochemicals". Hence, it was logically understood by many that the traditional hold of Indian Petrochemical Corporation Ltd (IPCL) and Reliance group on this sector will ease and many multinationals were sure to come in.

The new scenario also leads credence to belief held by experts that apart from IPCL's Nagothane complex, only Reliance and NOCIL might be the ones to set up a cracker during the eighth Plan, Which may well mean another setback to the petrochemical dreams of Vijay Mallya, R P Goenka and possibly GAIL (Gas Authority of India).
The notification also indicates some interesting battles won by the Reliance group. It is now certain that Bombay Dyeing which had submitted a proposal to manufacture paraxylene years ago, will again have to fight tooth and nail with the Ambanis to get the clearance.