An hour more for Shoppers in the Evening likely | 1969 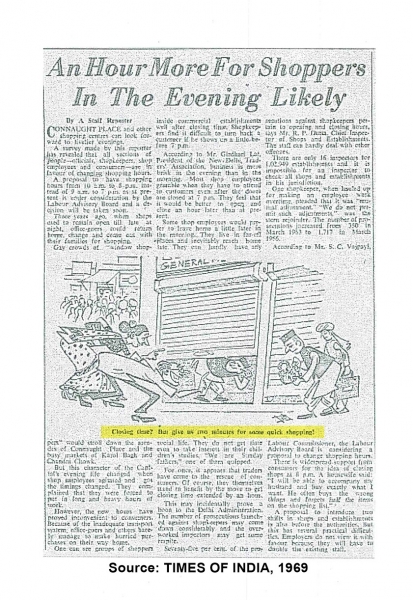 A survey made by this reporter has revealed that all sections of people- officials, shopkeepers, shop employees and consumers- are in favour of changing shopping hours.

A proposal to have shopping hours from 10am to 8pm instead of 9am to 7pm as at present is under consideration by the Labour Advisory Board and the decision will be taken soon.

Three years ago, when shops used to remain open till late at night, office goers could return home, change and come out with their families for shopping.

But the character of the Capital’s evening life changed when the shop employees agitated and got the timings changed. They complained that they were forced to put in long and heavy hours of work.

However, the new hours have proved inconvenient to consumers. Because of inadequate transport system, office-goers and others barely manage to make hurried purchases on their way home.

One can see groups of shoppers inside commercial establishments well after closing time. Shopkeepers find it difficult to turn back a consumer if he shows up a little before 7pm.

According to Mr. Girdhari Lal, President of the New Delhi, Trader’s Association, business is more brisk in the evening that in the morning. Most shop employees grumble when they have to attend to customers even after the doors are closed at 7pm. They feel that it would be better to open and close an hour later than at present.

Some shop employees would prefer to leave home a little late in the morning. They live in far off places and inevitably reach home late. They can hardly have any social life. They do not get time even to take interest in their children’s studies. “We are Sunday-Fathers,” one of them quipped.

This may incidentally prove to be a boon to the Delhi Administration. The number of prosecutions launched against the shopkeepers may come down considerably and the overworked inspectors might get some respite.

Seventy-five percent of the prosecutions against shopkeepers pertain to opening and closing hours, says Mr. R.P. Dutta, Chief Inspector of Shops and Establishments. The staff can hardly deal with other offences.

One shopkeeper, when hauled up for making an employee work overtime, pleaded that it was “mutual adjustment.” “We do not permit such adjustments,” was the stern rejoinder. The number of prosecutions increased from 350 in March 1963 to 1,717 in  March 1966.

According to Mr.S.C. Vajpayl, Labour Commissioner, the Labour Advisory Board is considering a proposal to change shopping hours.

A proposal to introduce two shifts in shops and establishments is also before the authorities.

But this has several political difficulties. Employers do not view it with favour because they will have to double the existing staff.