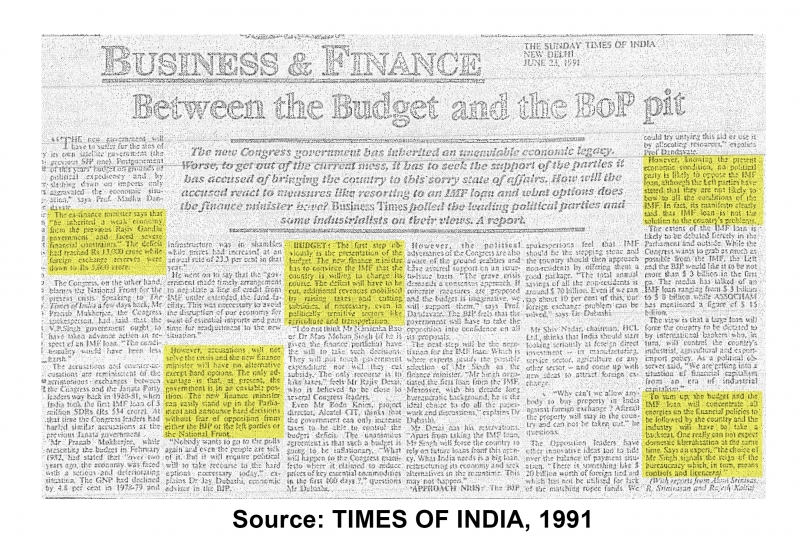 The ex-finance minister says that "he inherited a weak economy from the previous Rajiv Gandhi government and faced severe financial constraints". The deficit had reached Rs.13000 crore while foreign exchange reserves were down to Rs.5000 crore.

"Nobody wants to go to the polls again and even the people are sick of it. But it will require political will to take recourse to the hard options necessary today," explains Dr. Jay Dubashi, economic advisor in the BJP.

BUDGET : The first step obviously is the presentation of the budget. The new finance minister has to convince the IMF that the country is willing to change its course. The deficit will have to be cut, additional revenues mobilised by raising taxes and cutting subsidies, if necessary even in politically sensitive sectors like agriculture and transportation.

However, knowing the present economic condition, no political party is likely to oppose the IMF loan, although the Left parties have stated that they are not likely to bow to all the conditions of the IMF. In fact,this manifesto already said that IMF loan is not the solution to the country's problems.

To sum up the budget and the IMF loan will concentrate all energies on the financial policies to be followed by the country and the backseat. One really can not expect domestic liberalisation and at the same time. Says an expert, "the choice of Mr Singh signals the reign of bureaucracy which in turn, means control and license raj."