Delhi based senior journalist Mr.K.G.Suresh talks about ‘lifafa’ journalism and its painstaking rise in selling of news as a product. Presently the Director General at IIMS, he dwells into the days where the editorial department called the shots rather than the marketing department which is now, unfortunately, the case.

A lot of institutionalized corruption has come about in media which was unthinkable a few years back and the big instances like Nira Radia tapes and all those things happened and paid news syndrome was unheard of. You would hear I would say before, prior to 1991 some instances of say 'Lifafa' journalism, we used to call it 'Lifafa' journalism where along with the press release, the organizers of an event would place you know a small envelope to the reporter and the reporter would either decline it or accept it and either it would have a couple of notes in it or a gift voucher in it, things like that- small favours and some gifts whenever a press conference is held say on Diwali and all those things. There is a flood of information,  but a paucity of knowledge. Information has increased but knowledge has got reduced. Then came a new breed of journalist who lacked ethical values- ethics, professional ethics and whose only objective of coming into the field of journalism was to gain name, fame and fortune.  Fortune was never for us a priority. We never came into the media-we knew that, it would be a middle class existence throughout. But today they have become very aspirational, the younger lot and for them the larger cause is always the career and the money, the “moolah” to say has become the most important aspect of their existence. And as a result, then increasingly as I said the ownership pattern has changed. The corporatization of the media. Media is no more one committed journalist or a committed owner, say Ram Nath Goenka starting a newspaper of his own. Today as I said that it has been corporatized, it is like I mean you have a famous CEO or a newspaper owner saying that ‘some people sell soap, I sell newspaper’.So you know it has become a commodity. So then that has devalued the media. I mean if it's a commodity like any other commodity then why should you have any special privileges and rights which I enjoy as a media person or I claim or I demand. If I am also selling soaps then I better behave like a salesman. Don't expect as the fourth pillar of democracy all those things. So I believe that media's credibility has got a beating and particularly while in some big newspapers and some big channels the salaries have jumped- have gone up but in smaller newspapers and smaller channels the exploitation level of journalist has gone up like anything and a flip side is certainly you see, we all were the permanent employees of newspapers, so we never had the Sword of Damocles hanging over our heads. We were never afraid of our jobs. Job security was not an issue for us. Though we were paid less and we knew that by the 7th of the month the salary would be in the bank or given to us. And we would write what we felt was right. But today you have the contract system and in a big way in the industry. The trade unions have declined in the media and with the Sword of Damocles hanging over your head, employer holds the key. He would say that 'do this, or else you're fired'. So this hire and fire business has led to a situation where the journalist has put his pen at stake. In big newspapers and television channels, except- there are honorable exceptions if I may say but by and large it is no more the editorial department which calls the shot, it is the marketing department, the commercial department which calls the shot. 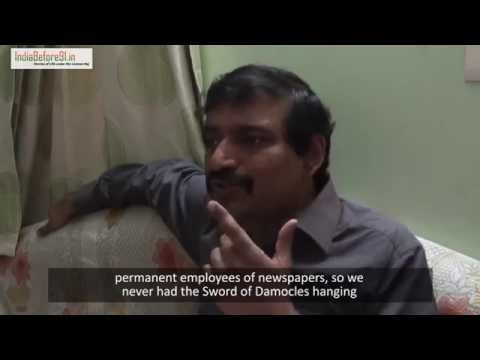