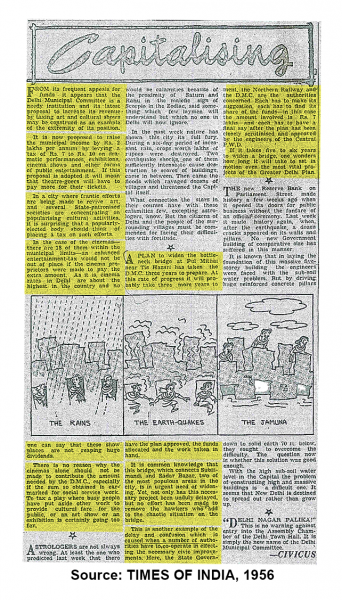 From its frequent appeals for funds it appears that the Delhi Municipal Committee is a needy institution and its latest proposal to increase its revenue by taxing art and cultural shows may be construed as an example of the extremity of its position.
It is now proposed to raise the municipal income by Rs. 2 lakhs per annum by levying a tax of Rs. 7 to Rs. 10 on dramatic performances, exhibitions, cinema shows and other forms of public entertainment. If this proposal is adopted it will mean that theatre-goers will have to pay more for their tickets.
In a city where frantic efforts are being made to revive art, and several State- patronised societies are concentrating on popularising cultural activities, it is surprising that a popularly-elected body should think of placing a tax on such efforts.
In the case of the cinemas- there are 18 of them within the municipal limits- an enhanced entertainment-tax would not be out of place if the cinema proprietors were made to pay the extra amount. As it is, cinema rates in Delhi are about the highest in the country and no one can say that these show places are not reaping huge dividends.
There is no reason why the cinemas alone should not be made to contribute the amount needed by the D.M.C., especially if the sum so obtained is ear-marked for social service work. To tax a play where busy people have put aside other work to provide cultural fare for the public, or an art show or an exhibition is certainly going too far.

A PLAN to widen the bottle-neck bridge at Pul Mithai near Tis Hazari has taken the D.M.C. three years to prepare. At this rate of progress it will probably take three more years to have the plan approved, the funds allocated and the work taken in hand.
It is common knowledge that this bridge, which connects Subzi-mandi and Sadar Bazar, two of the most populous areas in the city, is in urgent need of widening. Yet, not only has this necessary project been unduly delayed, but no effort has been made to remove the hawkers who add to the chaotic situation on the bridge.
This is another example of the delay and confusion which is caused when a number of authorities have to co-operate in effecting the necessary civic improvements. Here, the state Government, the Northern Railway and the D.M.C. are the authorities concerned. Each has to make its suggestion, each has to find its share of the funds - in this case the amount involved is Rs. 7 lakhs - and each has to have a final say after the plan has been closely scrutinised and approved by the engineers of the central P.W.D.
If it takes five to six years to widen a bridge, one wonders how long it will take to set in motion even the most vital projects of the Greater Delhi Plan.