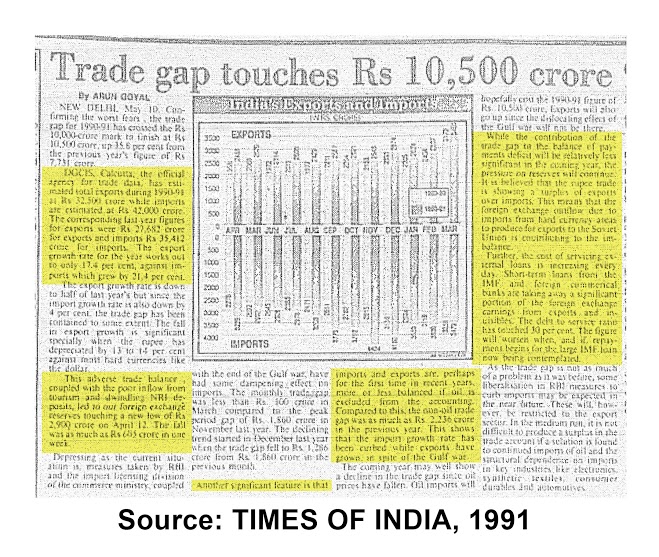 DOCIS,Calcutta,the official agency for trade data has estimated total exports during 1990-91 at Rs.32,500 crore while imports are estimated at Rs. 42,000 crore.The corresponding last year figures for exports were Rs.27,682 crore for exports and imports Rs. 35,412 crore for imports.The export growth rate for the year works out to only 17.4 percent,against imports which grew by 21.4 percent.
This adverse trade balance coupled with the poor inflow from tourism and dwindling NRI deposits,led to our foreign exchange reserves touching a new low of Rs. 2900 crore on April 12.The fall was as much as Rs. 685 crore in one week.
Another significant feature is that imports and exports are,perhaps for the first time in recent years,more or less balanced if oil is excluded from the accounting.Compared to this,the non-oil trade gap was as much as Rs. 2,236 crore in the previous year.This shows that the import growth rate has been curbed while exports have grown in spite of the Gulf War.
While the contribution of the trade gap to the balance of payments deficit will be relatively less significantly in the coming year,the pressure on reserves will continue.It is believed that the rupee trade is showing a surplus of exports over Imports.This means that the foreign exchange outflow due to imports from hand currency areas to produce for exports to the Soviet Union is contributing to the imbalance.
Further,the cost of servicing external loans is increasing every day.Short-term loans from the IMF and foreign commercial banks are taking away a significant portion of the foreign exchange earnings from exports and invisibles. The debt to service ratio has touched 10 percent.The figure will worsen when,and if repayment begins for the large IMF loan now being contemplated.