TAKE CUE FROM PAKISTAN:ASSOCHAM I JUNE 1991 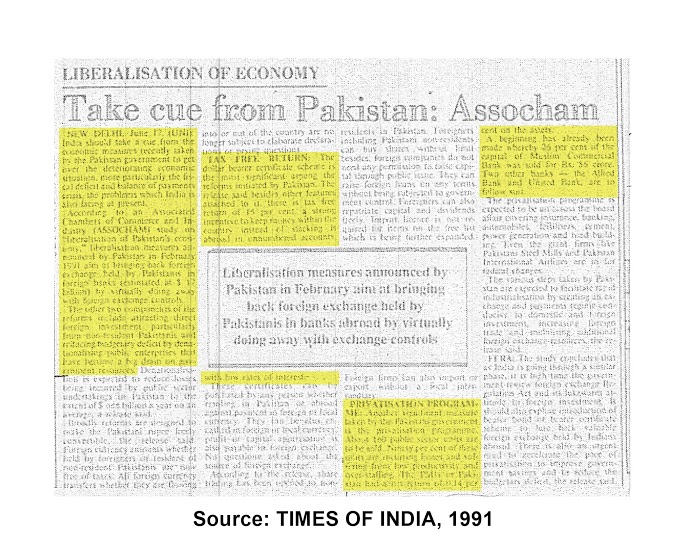 India should take a cue from the economic measures recently taken by the Pakistan government to get over the deteriorating economic situation,more particularly the fiscal deficit and balance of payments crises,the problems which India is facing at present.
According to an Associated Chambers of Commerce and Industry study on "liberation of Pakistan's economy",liberalisation measures announced by Pakistan in February 1991 aim at ringing back foreign exchange held by Pakistanis in foreign banks terminated at $ 17 billion by virtually doing away with foreign exchange controls.
The other two components of the reforms include attracting direct foreign investment particularly from non-resident Pakistanis and reducing budgetary deficit by denationalizing public enterprises that have become a big drain on government resources.
TAX FREE RETURN:The dollar bearer certificate scheme is the most significant among the reforms initiated by Pakistan.The release said besides the other features attached to it,there is tax free return of 15 percent,a strong incentive to keep money within the country instead of stocking it abroad in unnumbered accounts with low rate of interests.
PRIVATIZATION PROGRAMME: Another significant measure taken by the Pakistan government is the Privatization programme. About 160 public sector units are to be sold.
A beginning has already been made whereby 26 percent of the capital of Muslim commercial bank was sold for Rs. 85 crore.Two other banks-the Allied bank and United bank are to follow suit.