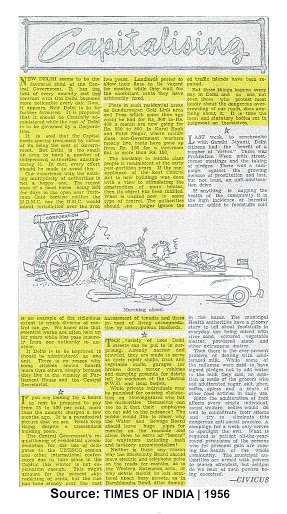 New Delhi seems to be the favoured child of the Central Government.It has the best of every amenity and the contrast with Old Delhi becomes more noticeable every day.Now,it appears, New Delhi is to be further favoured. It is proposed that it should be Centrally administered while the rest of the Delhi is to be governed by a corporation.
It is said that the Capital needs special treatment by virtue of its being the seat of the Government.But Delhi is too small an area to have a number of independent authorities administering it.In fact,every effort should be made to avoid this.
Our experience with the existing multiplicity of authorities is not a happy one.The recent case of a dead horse being left for days in the open air near Turkman gate because neither the N.D.M.C. nor the D.M.C. would admit jurisdiction over the area is an example of the ridiculous extent to which division of control can go.We know also that essential works are often held up for years while files pass leisurely from one authority to another.
If Delhi is to be improved it should be administered as one unit.There is no reason why some citizens should benefit more than others,simply because they live in the vicinity of Parliament House and the Central Secretariat.

If you are looking for a house to rent be prepared to pay from 75 to 100 percent,more than the amount charged a few months ago.It is a paradoxical picture that we see.Rents keep rising despite a tremendous building room.
The Central government's requisitioning of residential accommodation for the use of delegates to UNESCO session and other international conferences due to take place in the Capital this winter is not explanation enough.This might account for the present sky-rocketing of rents,but the rise has been steady over the past two years.Landlords prefer to allow their flats to lie vacant for months while they wait for the exorbitant rents they have arbitrarily fixed.
Flats in such residential areas as Sundarnagar,Golf link area and Pusa which some time ago could be had for Rs. 300 to Rs. 400 a month are now going for Rs. 550 to Rs. 800.In Karol Bagh and Patel Nagar,where middle class non-government workers mostly live,rents have gone up from Rs. 100 for a two room flat to more than Rs.150.
The hardship to middle class people is reminiscent of the early post-partition years.If the non-appliance of the Rent Control Act to new buildings was done with a view to stimulating the construction of more houses,then its object has been fulfilled.What is wanted now is some type of control.The authorities should no longer ignore the harassment of tenants and those in need of living accommodation by unscrupulous landlords.

The variety of uses Delhi streets can be put to is surprising.Already narrow and crowded,they are made to serve as cycle repair shops,fruits and vegetables stalls,garages for broken down motor vehicles and dumping grounds for debris left by workmen of the central P.W.D. and local bodies.
while private individuals may be punished for causing obstruction on thoroughfares who but the authorities themselves can see to it that their employees do not add to the nuisances?The public would like to know why the Water and the Sewage Board should leave huge pipes for months on the roadside and allow them to serve as "homes" for wayfarers including bath and lavatory accommodation!
Neither is there any reason why the Electricity Board should leave electric and telephone poles on the roads for months,as in the Western Extension area,or why the debris should be left scattered about busy streets,as in Barakhamba Road,after damaged traffic islands have been repaired.
But these things happen every day in Delhi and no one,not even those who protest most loudly about the dangerous over-crowding of our roads,does anything about it.It is time the local and statutory bodies sat in judgement on themselves.