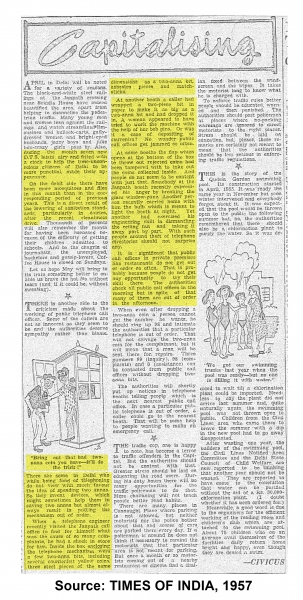 During the month seven new D.T.S. buses, airy and fitted with a clock to help the time- unconscious citizens of Delhi to be more punctual, made their appearance.

On the debit side there have been more mosquitoes and flies in this month than in the corresponding period of previous years. This is a direct result of the lowering of sanitation standards, particularity in dairies, after the recent cleanliness drive.

There are some in Delhi who while being fond of telephoning do not view with much favour the idea of spending two annas. So they invented devices, which might sometimes help them in saving two-annas that almost always result in putting the mechanism out of order.

When a telephone engineer recently visited the Janpath call office to find for himself what the cause of so many complaints, he had a shock in store for him. Inside the box and closing the telephone mechanism were a few two-anna bits, including several counterfeit yellow coins, three steel pieces of the same dimensions as a two-anna bit, asbestos pieces and match sticks.

At another booth a caller had wrapped a two-piece bit in paper to make it as big as a two-anna and had dropped it in. A woman appeared to have tried to work the machine with the help of a bob pins. Or was it a case of depositing of souvenirs? No wonder public call offices get jammed so often.

At some booths the flap when opens at the bottom of the box to throw rejected coins had been tampered with to take out the coins collected inside. And people do not seem to be content with just that. Somebody at the Janpath with recently expressed his anger by breaking the glass window pane. Another person recently carried home with him the bulb which is meant to light the booth at night. Yet another had exercised his engineering skills in dismantling the ceiling fan and taking it away part by part. With such people around theft of telephone directories should not surprise any.